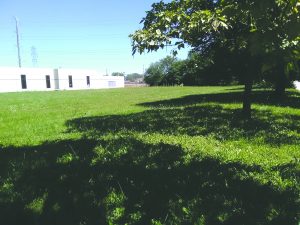 The Highland Park City Council voted to deny a special-use permit that would have changed the zoning classification for a 7.5-acre parcel, and eventually allow a 162-unit senior living complex to be built, during its Aug. 26 meeting.

The parcel covering 1535-1549 Park Avenue West was the former site of the Sam and Sonia Greenberg Radiation Center. It was shuttered in 2007, and would be razed as part of the project.

The contract purchaser of the property, the Chicago-based office of Trammel Crow Development Company, followed the process of public hearings before the city’s Plan and Design Commission with five sessions from March 5 through June 4 in seeking a site zoning change from Light Industrial to RM1 (Medium to High-Density Residential) as a map amendment.

According to the proposal, a three-story structure would be constructed on a campus containing “87 independent living apartments, 55 assisted living units, and 20 memory-care units … (a) special use permit for a planned development on the property and a special-use permit in the nature of a conditional use to permit the use of the property for nursing home care.”

At the June 4 session, the commission forwarded its recommendation for the city council to deny the package. The commission found the map amendment to be inconsistent with the adjacent properties that carried low- to mid-density restrictions, and based their decision on findings for a planned urban development and residential estate zoning parameters. Residents also took issue with the plans.

The city council concurred, and issued Resolution# R113-2019 in denying the proposal. It further said, “The proposed map amendment would not promote the general health, safety, and welfare of the city and its residents and property owners and … would permit the property for uses not consistent with general development trends within the general area of the property.”

Increased revenues for the city’s coffers through property taxes generated from the project were referenced by a representative for the developer, during a commission meeting, although those numbers remain unsubstantiated.

“The city council denied the Trammell Crow project … and since the project was not approved, it will not have an impact on property tax revenue,” said the city’s Community Development Director, Joel Fontane, in an email. “The city does not know (the amount) … the applicant made assertions about potential tax revenue at the public hearing.”

Additionally, the developer was to deposit $875,000 into the Highland Park Housing Trust Fund as a remunerative substitute required in the municipal “Inclusionary Zoning Ordinance of 2003.”

The action underscored an affordable housing element for any new residential developments of five, or more, units. The unsuitable amount offered by Trammell Crow was meant to cover seven such units, although eight units would be built.

However, the city’s trust fund program is unconnected to the Illinois Affordable Housing Act, also passed in 2003, which dealt with the shortage of affordable housing in the state by allocating limited new resources into a “Capital Fund” that made grant funding available to “acquire, construct, rehabilitate, develop, operate, insure, and retain affordable single-family and multi-family housing in this state for low-income and very low-income households.”

“The City’s Housing Trust Fund is not related to the State’s Affordable Housing Act. It is used to provide grants for scattered-site affordable housing,” said Fontane.

Going forward, the parcel could see other attempted uses that would coincide with a purchase opportunity.

Fontane noted, “This is a privately-owned property, (and) the owner of the property has the right to seek other development proposals, or have potential developers do so, on his behalf, in accordance with the city’s zoning code.”