The 1960s Batmobile, from the television series, and the trackless steam train were big hits in the parade. (Photo courtesy of Volo Auto Museum)

It may have started in March, but due to the novel coronavirus, terms like “shelter-in-place,” “face masks,” “social distancing,” and “business closures” have become commonplace.

It seems like forever that staying home is the new norm, as opposed to routine daily activities that were once taken for granted. The emotional toll can be numbing.

However, Volo Mayor Stephen Henley had an idea to help lift the spirits of the village’s residents and approached Brian Grams, director of the Volo Auto Museum, with a unique idea: a parade of classic and celebrity cars through all the residential areas.

“We already have taken some of our cars out for parades, and appearing at birthday parties, as time permits, and our mayor suggested a parade through Volo … we liked the idea,” said Grams. “A route was set up from the museum through the village. We have George Barris-created vehicles on display, and the replicas go on the parades, while the others remain in the warehouse.”

Barris is a legend in vehicle designs and has created some of the most iconic cars for television shows like the Batmobile, the Munster’s grave hearse and Dragula, K.I.T., along with the Ghostbusters hearse, Boot Hill Express, and cars for celebrities like Elvis Presley and James Dean.

The museum has been operating for more than 25 years, and was started by William Grams Sr. and his wife, Gertie, as a family destination. 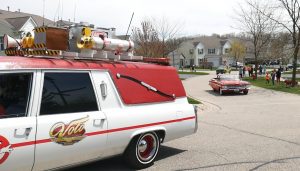 The famous Ghostbusters mobile also appeared in the May 1 parade. (Photo courtesy of Volo Auto Museum)

“You know that all the planned events were canceled, so you can’t do anything,” said Grams. “The parade idea was perfect. When I was growing up here in Volo, it was about 200 people, and it has grown to a population of 5,500. We thought the parade would take about 20 minutes and it took two hours through all the subdivisions. People had decorated their driveways, written ‘Thank You’ in chalk colors … it was wonderful.”

The parade stepped off from the museum parking lot just before 1 p.m. May 1. The parade route straddled both Lake and McHenry counties.

Visitors were invited to view the parade vehicles, while staying in their cars, in the parking lot that afternoon, initially between 2-5 p.m., including the surprising three-quarter-scale trackless steam locomotive. However the parade was a little late in returning to its home base, after following the full course that was laid out in conjunction with the village. 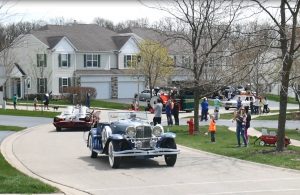 The May 1 parade through Volo brought joy to residents impacted by stay-at-home orders. (Photo courtesy of Volo Auto Museum)

In addition to the museum with its collection of antique, classic, muscle, and show cars, the complex also encompasses the Volo Antique Malls, a series of connected buildings with multiple levels containing all manner of collectibles and vintage items.

“Everything is closed right now, until June 1, by executive order,” said Grams. “A lot of people are calling us about doing parades at birthday parties, and it’s something that can be done safely in observing safety guidelines. But the May 1 parade was something uplifting for the whole community, especially in these times.”