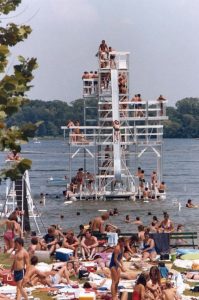 The 45-foot tall “J-Slide,” built by Stanley Jachec, is still dry-docked on the property, but will not be re-floated.

As Waucondafest kicks into gear at Cook Park June 21-24, village officials are also celebrating the green light given to its park district in the form of a conditional special-use permit that will propel a $3 million effort to reopen the iconic Phil’s Beach property.

The Village Board issued the unanimous vote to approve the document, during its May 15 meeting, and the staging is in place to pursue contract bidding for construction this fall.

The Phil’s Beach site near on 300 block of N. Main Street created many memories for county dwellers, and the famous “J-Slide,” standing nearly 45 feet high dropped swimmers down its chute eventually to glide over the water of Bangs Lake. The beach closed in 1990, due to insurance obligations and costs, by the Reilly family, descendants of original owner, Phil Froehlke.

The village’s Park District Board approved the purchase of the 3.5-acre site on a unanimous 5-0 vote, during its Sept. 13, 2016 meeting, at a cost of $690,000. A May 2018 soft reopening date did not occur, although current progress is moving toward a full opening by the spring 2019. The beach will have many new amenities, although there will be one key component lacking in the overall plan.

“We cannot refloat the slide, and put it in the water anymore … it’s the most frequently asked question about all this,” said Nancy Burton, the village’s Parks and Recreation Director. “There’s no liability insurance to cover its use, and has been dry-docked on the property … it’s definitely an icon. We’re really very excited about all the prospects.

“The Village Board also itemized contingencies for the special-use permit,” she said. We’ve been out there, working with the neighbors on the fencing on the north and south sides. We want to be very neighborly.”

Installing fencing along the perimeter of the parcel and beach was one of the stipulations attached to the permit. Landscaping is also part of the program in removing dead or dying shrubbery and invasive plants on the south property line, as well as building a buffer, or berm, as a separation.

Design plans cite a bathhouse that includes indoor showers and private changing rooms, and a boardwalk promenade. A picnic pavilion and a cordoned wading area are also in the mix.

“Once the project goes out for bid this fall, it will probably entail a 20-day period for construction contractors to submit their proposals and cost estimates,” said Burton. “The board allowed us to move forward with the project, gather findings, get the bids, and put it all together. There is property across the street from the beach, and that will be used for additional parking.”

As a condition of the sale, one of the descendants, Kathy Reilly, will continue living in a house on the premises.

Froehlke opened Phil’s Beach opened in 1926, on the western side of Bangs Lake, a short distance from the historic downtown area on Main Street. Abutting Phil’s Beach was Sunnyhill Beach, owned and operated by the family of Stanley Jachec, who invented and erected the slide. Both sites were popular with weekend tourists, often creating traffic tie-ups that blocked access through the town.

Sunnyhill Beach, opened in 1945, was a 3-acre parcel purchased by Jachec’s mother with a $10 down payment to the seller, the former mayor of Wauconda. It closed in 1992, due to rising insurance premiums. Site equipment and other items were given away, and the property sold to residential developers. Jachec passed away in September 2014.

Both beaches were featured in the 1979 John Belushi and Dan Aykroyd film, “The Blues Brothers.” In one scene, the Bluesmobile is seen riding on the beach, as Aykroyd’s voice advertises an upcoming show from a giant speaker tied to the car’s roof. Film crews also used parts of the intersection at routes 12 and 176 for several chases.

Burton noted that the beach’s status will draw families and beachgoers back to the village, and potentially act as a boon for the tourist trade.

“Bringing the Phil’s Beach site is an important acquisition,” she said, “and we’re shooting for everything to follow in the right order, and keeping a timely forward progression on it.”