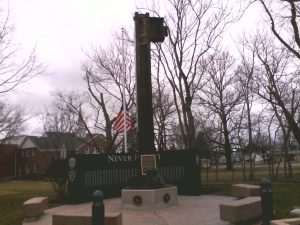 The Village Board of Wauconda is moving forward with obtaining cost estimates on four storyboard plaques that will anchor benches in proximity with its Sept. 11 memorial, as the wording and purpose have entered into a concurrence phase between village officials and a volunteer community organization.

The motion came during its Dec. 5 meeting, and signaled a tacit understanding that the memorial and the adjacent park honoring military veterans will be individually distinct, yet tied together.

The Heroes of Freedom Memorial was unveiled Sept. 11, 2014 in a park located at 301 S. Main St, 13 years after the tragedy, as a way to honor the World Trade Center and New York City victims, while serving as a stark reminder of terrorism and a call to vigilance against it.

The memorial includes a 20-foot beam from one of the trade center buildings, concrete boulders from the base, and a bronze legend plaque, and storyboards depicting the tales of the four commercial planes lost that day.

“Don Kutinac, one of the original members on the namesake committee, established the war memorial on Liberty and Main streets, and he was instrumental in the Sept. 11 memorial, with his four storyboards at the site,” said Wauconda trustee Ken Arnswald, also part of the village services committee. “We had a meeting last October, he attended and was appreciative of the effort. The bronze dedication plaque on the column is what we’re aiming for.” 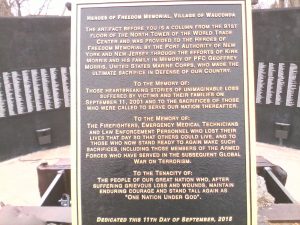 The bronze plaque at Wauconda’s Heroes of Freedom memorial honors first responders and victims of the 9/11 tragedy. (Photo by Gregory Harutunian/for Chronicle Media)

The plan is to pursue cost estimates on four storyboards that would be placed near four benches at the site, with each one depicting the fate of the four planes that were used in the attack at both trade towers, Shanksville, Penn., and the Pentagon. There were early conflicts between the village and the volunteer group, as to whether the memorial’s inclusion should extend to military veterans of Iraqi Freedom, and Desert Storm.

“That effort, while worthy, was not presented to the village board initially, and it was reverted back to the initial intent of honoring the first responders and victims of the Sept. 11 attack,” said Arnswald. “It had moved away from the original concept. We wanted the storyboards to accurately reflect the timeline, and we contacted the New York Port Authority for details. We had the grammar and spelling checked, and the committee went through the wording … now, we’re waiting to see what the cost factors are.”

Controversy has always appeared to surround the memorial effort, as the Wauconda site evolved from a proposed memorial plaza meant for Gurnee. That village’s former trustee, Kirk Morris, began a nonprofit foundation in 2010 to honor his son, Geoffrey, a marine killed in Iraq, six years earlier.

Village officials, and the foundation, were at odds over the memorial’s progress, and location in a floodplain area adjacent to municipal buildings, prone to inundation during peak levels. Civil litigation was generated in early 2013. A settlement agreement led to the village reimbursing $200,000 to the foundation.

Morris continues canvassing for suitable venues to construct the memorial, and the foundation had procured an artifact: A Twin Towers beam, from the New York Port Authority. The artifacts, stored in their warehouses since 2001, were steadily dispersed across the country for memorial tableaus, and as of last year, those items were dwindled to a remaining few pieces. 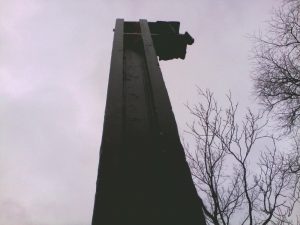 A 20-foot beam from the north towner at the World Trade Center is part of the memorial plaza. (Photo by Gregory Harutunian/for Chronicle Media)

Arnswald is a retired firefighter with the Countryside Fire Protection District that has jurisdictions including Vernon Hills, and Midlothian.

“I remember just beginning my shift at the station, when the news unfolded that morning,” he said. “It was quiet. I told the crew to continue on with their standard requirements for the day … maintenance of the equipment and vehicles, and then, to stay alert, and pay attention. This was something that no one forgets.”

Former Wauconda Mayor Frank Bart had said the Heroes of Freedom Memorial includes a column from the 91st floor of the World Trade Center’s North Tower, set in a Pentagon base adorned with the seal of each Armed Forces branch. Surrounded by four benches, each representing one of the four hijacked planes, soil is used for landscaping from the Flight 93 Shanksville, Penn. crash site.

Tentative plans call for a summer 2018 installation date of the plaques.