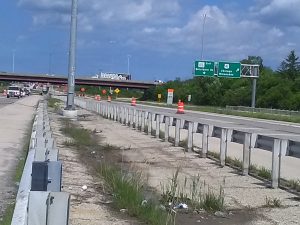 The Route 41 exit shows the boundary of the 32-acre parcel owned by Waukegan and sited for a possible casino. (Photo by Gregory Harutunian/for Chronicle Media)

A gaming expansion bill, passed by the state General Assembly over the June 1 weekend, is expected to generate more than $1 billion in additional revenues for Illinois and is especially important to Lake County.

The new gaming legislation singles out licenses for six new casinos, including the city of Waukegan, which has long sought such funding mechanisms for other initiatives.

A 32-acre site near the southwest corner of routes 43 and 120 is owned by the city by what is now Fountain Square, the successor to the defunct Lakehurst Shopping Mall complex whose financial fortunes were decimated decades ago by the Hawthorn Shopping Mall in Vernon Hills. Those main Lakehurst structures are demolished and long gone, replaced by a mixture of midrange hotels, shopping outlets, restaurants, and multiunit residential developments.

The parcel has been under consideration by city officials for some type of commercial development since the early 1990s. Discussions about a casino formally took shape in 2008, when bidding opened for the state’s 10th and final gaming license. It was later awarded to the city of Des Plaines, and the resulting Rivers Casino was opened near I-90 and the O’Hare International Airport.

One reason the Waukegan casino bid failed was its financial consortium becoming clouded in controversy with the disclosed involvement of William Cellini through ancillary intermediary companies and officer registries. Cellini, a heavy Springfield Republican donor and lobbyist, was convicted in 2011 as part of a conspiracy plot to extort money from a Hollywood producer. He was sentenced the following year, receiving a one-year prison term.

Waukegan Mayor Sam Cunningham is aware of the Cellini episode and deems the incident as “unfortunate.” He remains enthusiastic over the prospect of gaming expansion aiding a rebirth in the municipality’s future.

“We’re waiting for the governor to sign the legislation, giving him the opportunity to celebrate this historic moment through his signature … I hope to be there to witness it. The process then goes to the Illinois State Gaming Board, which actually awards the license.

“We want to have a well-assembled SWAT team in the city government to relay definite requests for information. We know what we are looking for, but also, what do others want to see, should we be fortunate enough to get the license? The Redevelopment Agreement is what we can bring … we have to be very strategic as to what the goals are,” he said. “There is a declining property site for a casino, and I assure you, we will not squander this opportunity.”

Senate Bill 0690, was sponsored by state Sen. Terry Link (D-Indian Creek) and Rep. Robert Rita (D-Blue Island). Both were both unavailable for comment.

The bill was sent to the governor’s desk for endorsement June 2, but the content had changed dramatically since its Jan. 31 senate submission and first reading. Entitled, “PTELL-Qualified School District,” the bill amends the “Investment in Kids Act … creates the Leveling the Playing Field for Illinois Retail Act,” a sweeping package encompassing parking excise taxes, school district property taxes, the cigarette taxing act, and job initiative programs.

It also amends the Gambling Act of 1975, horseracing, and increases the number of Cook County gaming positions upon signature, with some exception effectuated Jan. 1, 2020. The underlying purpose is to increase and bolster the gambling monies accrued by the state, as revenue projections have fallen short.

“When you look at what the intent of the gaming bill actually is for, we need it now … more than we did 10 years ago,” said Cunningham. “We are actually named into the legislation, and our chances are so much better than a decade ago, when the entire state was competing for one gaming license. Vetting of the process is not just picking the right developer and operator. Based on how it’s laid out, you have bipartisan support from legislators and a governor who understands the needs for the intent.”

Cunningham is counting on the city’s corporation counsel to bring in the right developer and the right attorney to guide item through the entire process.

“We need to be vigilant, watch for things, guided step by step. We’re going to have the right people in-house, and through partnering, so we don’t get blindsided and the process derailed, as with the prior initiative.

In addition to Waukegan, other communities identified in the legislation are the communities of Danville, Rockford, and Williamson County, as well as two undetermined locations in Chicago and its south suburbs.

“We all have an awesome chance for our respective communities, and not just Lake County, but all of Illinois … with revenue for our infrastructures, our own bridges, our own roads, and pension contribution funding to the police and first responders. These are critical elements.”

Dave Motley, Waukegan’s public relations director, noted, “We’re just waiting for the governor to sign the legislation, at this point. Then, Mayor Cunningham has a template to hit the ground running.”