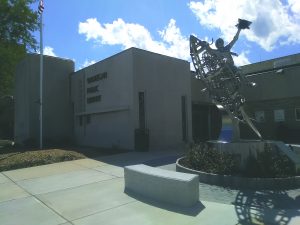 The prolific writing career of Waukegan-native Ray Bradbury was honored in his hometown with an Aug. 22 ceremony that presented a new sculpture on the public library plaza, and just in time for his 99th birthday celebration.

“Fantastical Traveler,” a 12-foot stainless steel statuary shows Bradbury riding a rocket with an outstretched arm holding a book, and its pages seemingly flapping in the wind.

Artist Zachary Oxman’s creation has an open framing allowing an airy and almost weightless feeling. His entry was chosen from among three finalists by the Ray Bradbury Statue Committee in 2016, one year after the project was announced. The $125,000 cost was raised through private and public donations from around the globe, a notion that would have appealed to the late author.

“We’ve had lots of great positive responses where people are impressed with the statue itself,” said Selina Gomez-Beloz, the library’s executive director. “What drew me here is that the community is very supportive of the library, and the programs. All the government officials that I’ve worked with, everyone … there is a deep connection with the library. It’s just wonderful to be a part of it.”

Oxman spoke at the ceremony, saying, “(He) gifted us his ever expanding universe of imagination, intellect and optimism for our future … we see a grown man on the outside yet a curious boy on the in(side). Ray loved metaphors, and this rocket is the personification of the scores of novels young Ray devoured at the Waukegan library that propelled him to uncharted worlds.”

Bradbury, born in 1920, wrote stories for various magazine publications, authored novels and anthologies, fashioned screenplays for film and television, garnering numerous accolades. Waukegan was memorialized as “Greentown,” in his most endearing book, “Dandelion Wine.” Many of the places he frequented as a boy were included, and many still exist such as his family’s house behind that of his grandparents on St. James Street, now a private residence, and the famous Madison Street cut into the Waukegan River ravine to the “renamed” Bradbury Park.

However, he always spoke about his young adolescent hours spent reading in the first Waukegan Public Library, located on the northeast corner of Washington Street and Sheridan Road.

A “gift” from steel magnate Andrew Carnegie and erected in 1903, the library building was part of his “surplus wealth” effort to provide places and resources of culture for the masses, as well as a tacit gateway to education. The Waukegan structure featured a skylight, marble stairs, a winding circular ladder to the different levels of bookshelves, and each library member received a personal library card, typed on wallet-size cardboard with a small metal identification stamp.

“People do remember the Carnegie Library, which is still standing, and I get to hear stories from the community about their parents, grandparents, and others that grew up with it. It’s still empty, and needs a lot of work,” said Gomez-Beloz. “The library administration is not actively working on any projects there. An idea that has been floated before, a Ray Bradbury walk re-tracing his steps through the heart of the town … those types of program ideas going forward are subject to research, and time committed before a larger project.”

The open corner plaza at the “new” library, which opened in 1965, is located at 128 N. County Street near the building’s entrance. Visible at night, the statue reflects and captures all the lights from the surrounding streetscape. A sunny day brings out the brilliance of the steel, connecting it in a way with the Carnegie library.

“I see the library as improving our presence and our value in community,” said Gomez-Beloz. “We’re leading the charge for the upcoming census and the response rate by helping educate and encourage participation. Our partnering with so many organizations will also expand and bring more exciting programs to the community.”