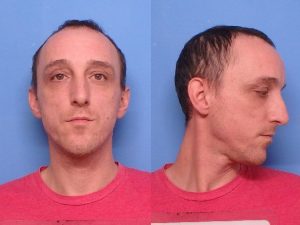 A Waukegan man has been charged with first-degree murder in the September killing of an elderly woman in her home.

Chad Jones, 41, a resident of the 2500 block of Garrick Avenue, was ordered held in Lake County Jail on $2 million bail during a bond hearing Jan. 8.

The three-month-old case ends an investigation that resulted in charges in three different states.

Officers from the Waukegan Police Department responded to a single-family residence on the 2700 block of Evergreen Road on Sept. 15 at the request of the family of Marlyn Cook, 74. The Cook family had located the victim deceased inside the residence.

Based on that information, the Waukegan Police Department Major Crime Unit was activated to process the scene for possible foul play, and the department’s Criminal Investigations Division responded to conduct the investigation.

Detectives said they determined during the investigation that Jones and his vehicle were in the area Sept. 13.

The Lake County Coroner’s Office conducted an autopsy on the victim Sept. 16 and classified the death as “undetermined,” pending further lab results.

On Sept. 18, Jones was arrested in Lake Geneva, Wis. in connection with a home invasion. Jones was taken into custody after he attempted to flee from officers during the incident. Police said Jones drove to that Lake Geneva home in his silver 1997 Mercury Grand Marquis. Information on Jones’ arrest was posted on the Lake Geneva police Facebook page.

Waukegan detectives went to the Walworth County (Wis.) Jail on Sept. 20 in an attempt to speak with Jones.

On Sept. 21, Jones posted $10,000 bond and was released from jail. Police said Jones returned to Waukegan, then drove to Dubuque, Iowa, where he was again taken into custody. This time for allegedly fleeing from a traffic stop. Jones was taken to the Dubuque County Jail.

On Oct. 11, Waukegan CID detectives were informed that Jones’ DNA was located on the murder victim’s body.

Waukegan detectives executed a search warrant Nov. 7 on Jones’ 1997 Mercury Marquis, which was still in the custody of the Lake Geneva Police Department. During the search, evidence was collected regarding the Cook investigation.

Jones was transferred Nov. 24 from Dubuque to Walworth County due to the home invasion charge stemming from the Lake Geneva incident. Jones posted bond in Walworth County Nov. 25, but was taken into custody by Waukegan detectives and driven back to Waukegan.

He was charged with the Sept. 13 residential burglary of the Cook home and ordered held in Lake County Jail on $500,000 bail.

Waukegan detectives and investigators from the Lake County State’s Attorney’s Office were informed Dec. 23 that DNA evidence placed Jones in contact with the victim. The Lake County Coroner’s Office then changed the victim’s death to a homicide Jan. 7.

Assistant Lake County State’s Attorney Russell Caskey said during Jones’ bond court hearing that DNA test results showed the Waukegan man’s blood was found on Cook’s face and his DNA was discovered under the fingernails of both victim’s hands.