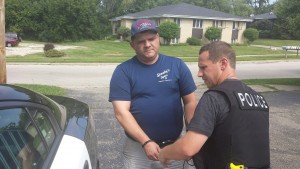 Spiro Lempesis was arrested by a River Forest detective at his Rockford home on Sept. 3 on a charge of criminal sexual assault to a minor.

The former head baseball coach at Concordia University in River Forest was found guilty Dec. 5 of sexually molesting a high school baseball player during private pitching lessons while on the Concordia campus.

A stunned Lempesis, who now faces up to 14 years in prison, stared straight forward as his attorney approached the bench after the verdict, moving only after a bailiff tapped him on the shoulder and motioned him to the bench.

Ginex ordered Lempesis’ bond revoked and that he be jailed until his sentencing on Dec. 27.

In the end, Ginex’s verdict came down to him finding former Concordia player Anthony Collaro’s testimony credible. The judge said the molestation Collaro experienced as a minor was just the precursor to the well-documented sexual behavior Lempesis purportedly coerced him into as an adult while at Concordia.

Lempesis’ attorneys hammered away at Collaro’s testimony and the fact that Collaro never told anyone at the university or the police department back in 2010 about Lempesis molesting him as a minor.

But Assistant State’s Attorney Lauretta Froelich pushed back aggressively, saying they had proved their case, and had presented “unrebutted testimony” (from Collaro) that Lempesis had molested him when he was a teenager.

The judge dismissed the defense argument that Collaro’s not telling anyone about Lempesis’ molestation of him as a minor was proof that the sexual behavior began only after Collaro enrolled at Concordia.

Former federal prosecutor Patrick Collins testified in court that Collaro told him he owed Lempesis $10,000 for equipment and travel-related expenses, and that his investigation determined that Lempesis had paid Collaro between $400 and $2,000 each for some 20 instances of videotaped sex acts. Those videos were then sold reportedly to a California pornographer.

The defense pointed out that Collaro did not mention any sexual abuse at Lempesis’ hands while a minor in his two civil suits. And under questioning by Concordia Dean of Students Jeffrey Hynes in 2010 and Collins in 2012, Collaro denied being inappropriately touched by Lempsis when he was a minor.

The prosecution countered that Collaro testified he did not become aware of the abuse as a minor until he had undergone numerous sessions of therapy after graduating.

Defense attorney Blake Horwitz sought to undercut that as well, pointing out that there were more than a dozen witnesses that Collaro could have subpoenaed to corroborate his testimony regarding his recovered memories, but did not call, and that under questioning, Collaro was unable to name any therapist.

“The state brought no one (as a witness),” Horwitz said. “There’s no therapist whatsoever who’s come forward.”

In finding Collaro’s testimony credible, Ginex noted that both Concordia investigations focused only on Lempesis’ conduct on campus with his baseball players and not before that.

“It seems to me that Concordia was more concerned with acts that occurred between a student athlete and a coach, than what happened to Mr. Collaro and Mr. Lempesis prior to that,” Ginex said.

Lempesis’ undisputed and graphically documented sexual behavior with Collaro when he was a sophomore at Concordia, Ginex opined, “corroborated what (Collaro) said on the stand.”

The conviction is a coda of sorts to a story that began more than seven years ago.

Lempesis, the winningest coach in Concordia’s history, was fired in September 2010 after an internal investigation showed that Lempesis had videotaped numerous sex acts between him and Collaro.

River Forest police investigated at the time, but declined to bring charges due to Collaro being a consenting adult.

That might have been the end of it except for Elmhurst police finding Lempesis in the back seat of a car with a 16-year old boy in June 2012. He was not charged after the boy told police he’d lied that he was 19 years old.

When Concordia administrators heard of the Elmhurst arrest, they hired Collins to conduct a comprehensive 520-hour investigation into Lempesis’ behavior with Collaro and others on the baseball team in 2010. That report was not made public.

Collaro filed a civil lawsuit against Lempesis and the university in 2013. That case was placed on hold pending resolution of Lempesis’ criminal case.

Sometime in 2015, River Forest police initiated a second investigation into whether Lempesis had had sexual contact with Collaro or others as minors. Among the evidence they gathered was Collins’ report to Concordia regarding the Collaro case.

Lempesis was arrested at his Rockford home in September 2015 and charged with four counts of aggravated sexual assault on Collaro when he was 15 years old, including fondling him under the pretext of trying on sports equipment and digitally penetrating him during a shower.

Lempesis has repeatedly denied in numerous media interviews that he ever had sexual relations with any minor. He has called civil lawsuits by Collaro and another man efforts to reap large financial settlements from educational institutions.

In her closing argument, Froelich foreshadowed Ginex’s findings, saying Collaro was “here telling the truth.” It was Lempesis, she said, a man who Collaro looked to as a father figure, who determined when, where and how everything would happen in an environment he controlled.

Calling Lempesis a “classic predator,” she argued he had groomed Collaro to accept his inappropriate behavior from the time he was a 10-year-old attending one of Lempesis’ baseball camps. The videotaped sexual acts between the two, she said, were a continuation of that grooming.

“There’s preparation of Anthony Collaro to be a victim at a higher level,” Froelich said, “and then there’s the pornography (as a Concordia student).”

It was abuse, she said, “that happened in hiding, in secret, with no witnesses, controlled by this defendant.”

“A predator doesn’t pick the fastest animal in the watering hole,” Froelich concluded. “He picks the one he thinks he can catch. He thought he could catch Anthony Collaro.”

“Today the defendant is the one caught.”