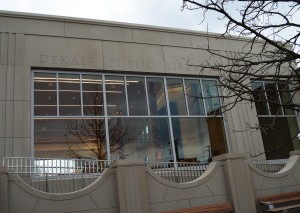 Views of the exterior of the new addition to the DeKalb Public Library. (Photos by Jessi Haish LaRue / for DeKalb County Journal)

Dee Coover knows the DeKalb Public Library can now serve a much larger purpose than just offering reading material to the community.

The library, which recently tripled in size from 19,000 to 65,000 square feet, is now a “community stop,” said Coover, the library’s executive director.

Additional space and technology advancements were needed to support a growing community and will allow the library to now offer literacy in all of its formats.

“I think it is extremely important in a democracy for literacy to be a high priority in the community, and this community has done it,” Coover said. “I’m very, very proud.”

But the library had drawbacks, Coover said. It wasn’t handicapped accessible and at 19,000 feet, it eventually outgrew capacity.

For every new book that came into the library, one had to go. With the expansion, the library will be able to have a “deep and rich collection,” she said.

The library celebrated the expansion with a January grand opening that highlighted additional space, updated technology, more meeting rooms for clubs and other groups, and a children’s play area.

The expansion project, which broke ground in 2014, cost approximately $25.3 million. A portion of the cost was covered by an $11.6 million grant from the Illinois State Library.

A grand “reopening” of the original portion of the library is scheduled for early September.

The expansion will connect directly to the original building once updates are completed, including demolition, restoration, landscaping, and technology enhancements completed this summer.

In the last month, most patrons have welcomed the new expansion and look forward to the restoration and improvements of the original, especially by making the entire library handicapped accessible.

“I think they were thinking ahead to the future with this building,” said Kimberly Hall, a regular library patron and DeKalb resident. “DeKalb will do nothing but grow, and this library had to reflect that. You can tell that a lot of thought went into this building.”

In the last month since the expansion’s opening, Hall has made use of the library’s main lobby with her group, the DeKalb Fiber Arts Collective. She and a few others sit in the main lobby to knit and talk.

Shelby Stanley, a DeKalb resident and member of the group, said she likes how beautiful, bright and open the expansion is. The group used to meet at Barnes & Noble in DeKalb until it closed in 2014, and “sort of wandered around” until they found they could utilize space in the library’s expansion to meet.

Coover said many groups make use of the open spaces and meeting rooms of the library, and its become one of the issues they’ve had to sort out since the grand opening; they need more software for meeting rooms so all meetings and presentations can be as effective as possible.

“The building is well used; it’s a good problem to have,” Coover said.

Although the library has tripled in size, no additional staff was hired, Coover said. Instead, technology was put into play to make things more efficient. Self-checkout options are available for all materials, including a Redbox-like kiosk system to borrow library DVDs.

An automated book return takes returned items on a conveyor belt to the basement, where items are automatically sorted into categories by radio frequency identification technology. Each book has a sticker which, when scanned, gives the computer all required information on the book, such as genre and category.

Mike Page, a circulation staff member in his 11th year with the library, said he spends less time behind a desk and more time out and about in the building.

“Everything, especially the adult section is now in order,” Page said. “It’s very easy to help patrons. Most of [the patrons] are awed and amazed at the new building.”

Spencer Tritt, who has worked with the library for five years, said he appreciates how modern the library will be once complete.

“It’s a huge upgrade from before,” he said. “It’s good for the whole city to have this. I think it’s great.”