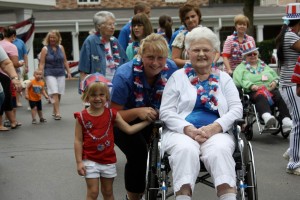 The Fourth of July intergenerational parade around the campus was one of the favorite activities of Sarah Kurth’s family when her two daughters attended Shepherd’s Flock. (Photo courtesy of Sheperd’s Flock)

“A lot of young people don’t know how to act around elders. It’s remarkable to me how many young people — and not just teenagers, even people in their 30s — have no clue how to be around elders,” said Maria D’Souza, a geriatrician and medical director at Wilmington, Del.-based St. Francis LIFE, which is a Program of All-Inclusive Care for the Elderly (PACE).

But a local childcare center is doing its part to provide area children with a well-rounded early education, and that includes starting a dialogue about aging by getting to know dozens of “grandmas and grandpas.” Shepard’s Flock is a licensed intergenerational childcare center that has shared an Arlington Heights campus with Lutheran Home — a community for seniors — since 1997.

The Fourth of July intergenerational parade around the campus was one of the favorite activities of Sarah Kurth’s family when her two daughters attended Shepherd’s Flock.

“I wish more long-term care facilities would branch out and put a daycare center on their campus,” added Kurth, who is also a campus administrator at Lutheran Home.

They even have intergenerational components with other age groups, like the teens who spend summer volunteering with the residents. And a lot of these teens, she added, are graduates of Shepard’s Flock.

“It’s a win-win situation,” Parrillo said. “The connection between the generations has a nurturing effect on both the children and the residents. There is an educational opportunity for both the children and the grandparents. The grandparents come in and they can offer lesson planning and storytelling to the children,” she said. “This also breaks down barriers so the children feel comfortable with the elderly population and they’re able to recognize differences and diversity. It really fosters a new dynamic thinking about how to bring all generations together for the betterment of society.”

Breaking down those barriers is what is of the utmost important to D’Souza, who did her geriatric fellowship at Duke University in 2011, and one of the reasons that she is looking to incorporate intergenerational activities into her PACE clinic. (PACE is a holistic, medical/social model that is used to keep frail elders in the community and out of nursing homes, D’Souza said. There’s about 110 in the country.)

“There’s a lot of ageism in our society,” she said. To move beyond change that ageism, she explained, the dialogue around the elderly, their contributions to society, their connections to other generations, etc., has to change. “A lot people assume that intergenerational activities are for the benefit of old people, that you’re doing something for them,” D’Souza said. “But what they don’t get is how much the rest of society is harmed by the lack of engaging with elders.”

Parrillo and D’Souza both pointed to the solution that an intergenerational program provides a parent who has to work, but also has both young children and an aging parent to care for. “Everyone knows somebody who’s a caregiver now,” D’Souza said. “It’s the new normal.”

Further, she said, the business of aging is rapidly changing: “Boomers are incredibly independent and are reinventing aging. They’re not going to be living in nursing homes … they are more interested in innovative models and assisted living possibilities.”