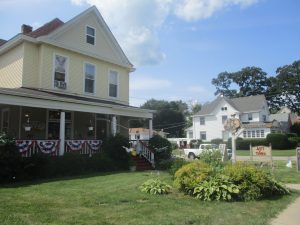 ArtTunes is located in a residential home near downtown Harvard. (Photo by Igor Studenkov/for Chronicle Media)

The ArtTunes store near downtown Harvard is a lot like its owner, Dale Sinderson — eclectic, artistic and filled with jokes and surprises. And, in some ways, it is straightforward. The sign out of the front lawn says “All Kinds of cool s(—)” — and both the name and the sign do a coarse, but succinct job of describing what awaits curious passersby as they step inside.

The store offers art supplies, musical instruments, pieces of musical equipment, wood carvings of Sinderson’s own design, an entire basement worth of antiques and a variety of humorous gift items and knickancks. While ArtTunes was originally a music store, it grew and evolved along with its owner’s interests. And though he faced some challenges, Sinderson has been able to build a loyal customer base, staying true to his dreams and beliefs as he continues to experiment and innovate.

Sinderson originally opened ArtTunes in 1986 in Chemung — an unincorporated town west of Harvard where he grew up. He quipped that his first store was little more than “a Unibomber hut” — and it wasn’t originally even supposed to be a music store.

“I bought a place in Chemung to be a grocery store, but Chemung had other ideas,” he said. “I decided to sell some guitars. It caught on. I started selling my own things. It caught on. And since then, it evolved into this.”

As Sinderson put it, his store defied characterization.

“I started selling just music stuff and stuff I [was] into,” he said. “And now, we got everything from antiques to antics. We’re a fine arts department store.”

When asked exactly how ArtTunes took its current shape, Sinderson mused that it “just sort of happened.”

“Basically, it sort of evolved into this,” he said.

As the store expanded, he decided to move the business to Harvard — though space was hardly the only consideration.

“Chemung is Libertarian, which means you can do what you want, that I can do what I want — but so can everybody else,” Sinderson mused. “And I decided that I like a place with rules. So I came to Harvard, where they got such things — and that worked out pretty well.”

The original Harvard location was downtown, on 1st Street, across the street from a coffee shop. The current location was a bit farther out — in a residential home at 606 N Division St. As Sinderson explained, it was simply the matter of what was available at the time.

As he readily acknowledged, having a business on what is otherwise a residential block is a drawback – ‘which is where the distinctive sign comes in.

“The sign really helped,” Sinderson said. “It brought in a lot more people.”

Indeed, the Chronicle found the store thanks to the sign. And, while interviewing Sinderson a few weeks later, a mother and her young son were spotted stopping by the store because, they said, the sign got their attention and they had to check it out.

When asked whether anyone ever took issue with the sign’s language, Sinderson said that no one has — and it isn’t something he’s too concerned about.

“Everybody on Facebook is an expert on Second Amendment, so I thought I’d give the First Amendment a run for its money,” he said.

The inventory in every category is wide-ranging and extensive. Artists can buy sketchbooks, paints, paintbrushes and drawing mannequins. Guitarists can buy guitars, guitar strings and amplifiers. As for knickknacks, many of the items ArtTunes sells are novelty versions of everyday items such as socks, oven mitts, postcards, soaps and coffee mugs. For example, one can buy “nihilism” soap and a postcard with a dinosaur riding a bicycle.

Some of the items are more on the curious side — most notably, the large animal masks. Sinderson recalled that he ones had some friends put on raccoon masks and rummage through garbage just to get people’s attention – and, sure enough, people did stop by, just to see what’s going on.

Sinderson said he gets many ideas for novelty items based on what’s popular on social media.

When asked whether some parts of the store are more popular than others, Sinderson said that it varied.

But perhaps the most unique part of the store are hand-crafted wooden hall hangings that Sinderson makes and designs. Many of them are cartoonish depictions of politicians such as Barack Obama, fictional characters and simply depictions of people playing games or doing jobs.

Sinderson said that he takes commissions. For example, he recently made a golfer wall hanging for a customer whose relative loves to play golf.

“I make and sell gifts that you can’t find anywhere else,” Sinderson said. “I follow my brain around, basically. I just think of an idea — that would be cool — and I just do it.”

And that approach has been paying off. Sinderson said that he has a core group of regular customers from the area, and repeat customers who may not live in the area, but who usually stop by whenever they are in town. And he said that he gets plenty of customers who simply happened to be passing by.

“Yesterday, I had a guy from Boston who stopped because of the sign,” Sinderson said.

He said he benefits from the fact that the stretch of Division Street ArtTunes is on a part of U.S. Route 14 highway, which links Chicago to northwestern Illinois, Wisconsin and other states farther west.

The store is also within walking distance of downtown Harvard and the city’s Metra station. Sinderson said that while he doesn’t get much business from people who use the trains, he does get business from people who are waiting to pick up friends and relatives from the trains. And he expects Metra’s recent decision to decrease fares for the Harvard station as part of a system-wide fare pilot will help ArtTunes.

It helps that, while several antique stores in Harvard, the closest music store is in Crystal Lake, and there aren’t many stores that sell any kind of art supplies in McHenry County.

Still, doing business hasn’t been entirely without challenges. The rise of online retailers and big box stores affected many small specialty stores, and Sinderson said that ArtTunes hasn’t been immune to it. And Sinderson said he was concerned about how President Donald Trump’s tariffs would affect his business, pointing to how tariffs against Mexico may raise the prices on some of his musical instruments, and tariffs against China could raise the prices on his gift items.

It wouldn’t be the first time international conflicts affected ArtTunes. Sinderson said that many of his amplifiers are made in Russia. When the United States imposed sanctions against it in the wake of the annexation of Crimea and Russia imposed counter-sanctions of its own, the prices shot up.

For all of the challenges, Sinderson said that he is comfortable with where ArtTunes is at.

“I’m doing OK,” he said. “I’m making enough to get by, and enough people are supportive of me.”

Sinderson said that, when it comes to customers, he is happy to answer questions, but he tries not to be pushy. Customers may not want to buy something the first time, but, he reasoned, if they have a good experience, they are more likely to come back again.

The store is open from 1 a.m. to 4:40 p.m. Monday-Saturday. While Sinderson said he usually takes Sundays off, he occasionally opens the store if the mood strikes him.

“I think [the store’s] popularity is growing, and I think it will continue to grow, so long as it doesn’t stay stagnant,” he said. “So long as you keep thinking of new ideas.”