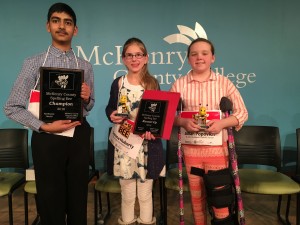 Ved Patel (from left) was the winner of this year’s McHenry County Spelling Bee, while Serena Huberty was second runner-up and Jillian Popovich was first runner-up. (Photo by Adela Crandell Durkee/for Chronicle Media)

For nearly three hours, students from around McHenry County vied for a championship on March 2.

The winner of the McHenry County Spelling Bee won an all-expense paid trip to the 2016 Scripps National Spelling Bee in Washington D.C. in May.

The spellers prepared for months. For some, it was their last shot. Individually, they stepped to the microphone, based on a random number draw. Contestant No. 1, Justin Chase of Mary Endres Elementary School, spelled “bandit,” and the competition began.

Each contestant had his or her personal strategy. Chase seemed to move his eyes into the corner of his brain, where the word lay revealed.

Georgia Sedlack of Olson Elementary School adjusted the mic, before stepping right, searching the audience, and proceeding with a smile. Serena Huberty of Richard Bernotas Middle School, wrote each word on the palm of her hand. Jillian Popovich of St. John the Baptist Catholic School, repeated the word and without hesitation, spelled it. Ved Patel of Cary Junior High School, proceeded with caution before uttering each letter in spaced staccato.

After 39 rounds, he clinched the county championship with the word, “precession:” a word meaning, the motion of the rotation axis of a rigid body, as in “The slow conical motion of the top’s slanting axis represents the course of precession;” of Latin origin. Patel said he knew the word.

Huberty took home a plaque. All participants received a Certificate of Achievement.