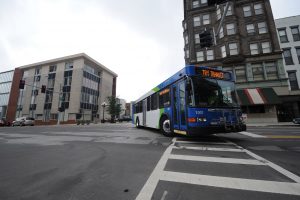 With a much-needed cash infusion from the state on its balance sheet, Connect Transit officials said the mass transit provider will continue operations into the new year, though the potential of a shutdown looms.

Leaders of Connect Transit, which has provided busing service to Bloomington and Normal since the early 1970s, in October warned of a potential shutdown in January as it was starved of cash as a result of the state’s ongoing budget issues.

General Manager Andrew Johnson at the time of the dire pronouncement said Connect Transit was owed nearly $5 million from the state, comprising one-third of the organization’s annual operating budget.

Nearly two-thirds of Connect Transit’s annual operating expenses are covered through the state via a fund that specifically is designed to benefit downstate mass transit providers quarterly.

A first-quarter payment of $1.88 million, covering the state’s share of Connect Transit’s operations from July through September, was submitted in late November, bringing temporary relief to the organization.

The recent contribution from the state comptroller’s office was included in a $17.6 million transfer to the Downstate Public Transportation Fund.

“It was appreciated, but it’s not a celebration right now,” Melissa Chrisman, business development and marketing manager said as she pointed to the cautious steps the organization is taking as future unknowns hang in the balance.

“There is no longer any talk of a service suspension on Jan. 1,” Chrisman said. “There are no talks of that nature right now in the future. We are happy to keep service going at this time.”

But Connect Transit, which operates a fleet of 60 vehicles, has yet to receive a second-quarter payment to cover a substantial amount of operating costs between October and December. If the funds are not provided, talks of a shutdown could be revisited again early in 2017.

State officials have attributed the delayed payments to a $9.2 billion backlog in bill payments rooted in the budget impasse in Springfield.

In a statement announcing receipt of the first-quarter payment, Johnson said he was optimistic future state funding contributions would eventually reach his organization.

A town hall meeting in Normal in late October at the height of the shutdown discussion was well attended, signaling interest in taking whatever steps necessary to prevent a complete halt in service.

“Our state legislators took an active interest in this funding problem, and we are very appreciative of the efforts as they continue to support us as we deal with this issue,” Johnson said. “We remain optimistic that the state will be able to bring these payments up to date and keep public transit moving in Bloomington-Normal.”

In addition to impacting the Bloomington and Normal residents who depend on it as a sole source of transportation, a shutdown would require temporary layoffs of most of Connect Transit’s workforce of nearly 150 employees.

At that time, the system was set up as an independent agency with a board appointed by the Bloomington City and Normal Town councils.

The system was rebranded to Connect Transit in 2012.

Beginning with horse-drawn coaches and progressing through today’s modern buses, there is a long tradition of public transportation in Bloomington-Normal dating back to the 1800s.

A joint effort of the City of Bloomington and the Town of Normal, the transit system operates as an independent agency governed by a board appointed by both the City and Town. In 2012, the transit system rebranded as Connect Transit and now the Bloomington-Normal community is served by a fleet of 60 transit vehicles and nearly 150 employees.