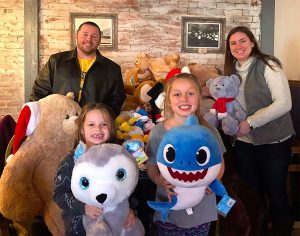 Santa might travel by sleigh but some Chillicothe children will be receiving Christmas gifts from police officers in squad cars this year.

The Chillicothe Police Department’s Cops for Kids program started in 2013 and expects to provide presents for 30 to 40 kids this year, according to Sgt. Nick Bridges, president of the Fraternal Order of Police Lodge 247.

“I had been watching all the other departments that had Shop with a Cop for Christmas and we had never had it, so I just approached the police chief and asked if we could start it and he was 100 percent on board,” Bridges said about the program’s beginnings in Chillicothe.

In the first few years, officers reached out to schools, churches and citizens for suggestions of kids who might be facing a bleak Christmas without help and then randomly drew the names of eight or nine children to be paired up with an officer for the day. The officers teamed up with local businesses and restaurants to take the kids shopping at the local ALCO store for toys and clothes and then had lunch with them.

After the Chillicothe ALCO store closed, the FOP decided to switch things up.

“Now we ask for the kids’ Christmas lists and we go shopping ourselves for as many items as we can and then deliver them to the kids,” Bridges said. “We’re able to reach about five times as many kids this way.”

Families who can use a little boost for Christmas this year had until Dec. 2 to write a letter to Santa and place it in a special mailbox located in front of the police department at 823 N. Second St. or fill out a form at www.chillicothepd.org/letters-to-santa.

“Sometimes we get a few more letters than we can help, but donations have been up in the last couple of years, so hopefully we can help everybody that writes in this year,” Bridges said.

The program is open to children who live within the IVC School District 321 boundaries. The officers try to spend about $100 per child, and the program is funded entirely by community donations. “We have a lot of good organizations that help us, including Summer Camp and the Helping Hands Resale Shoppe, as well as donations from businesses and private citizens,” he added.

The second annual Jeep Jingle during the recent Chillicothe Christmas parade raised more than $1,000 for the program. About 100 stuffed animals were also collected during the Jeep Jingle for the Cuddles for Kids program that was started by IVC high school student Taylor Larson to provide a fuzzy friend for children in need of a hug, whether it be a sick child in the hospital, in a children’s home or a victim of a house fire or natural disaster.

Jeep owners paid a $25 fee to be part of the Jeep Jingle and decorated their vehicles in Christmas lights and tinsel before staging a convoy into Chillicothe for the parade. Bridges said he came up with the idea after he bought a jeep two years ago. “I just thought it would be fun to do, and it’s actually a good time,” he said of the fundraiser.

The Cops for Kids program doesn’t specify any income requirements, but Bridges said, “Obviously, we’re trying to help the less fortunate. But there could be times where something really tragic happens in a child’s life like a death or a fire, so we’re there to help if we can. Or maybe their parents are sick and they’re going through a rough time.”

Occasionally, letters will arrive after the deadline and the cops still try to help if they can.

“One year we had already spent the funds and someone wrote in that they needed a bed. That’s all they asked for was a bed. So, I reached out to my friends and we raised some money and got the child a bed,” Bridges said.

“Another year a child wrote the letter, and I don’t think the parents even knew. I think she was kind of scared to ask their parents to ask us for help, so the child wrote a letter for her brothers and sisters. I had to call and ask the parents for permission to even to do it, but they were very happy and grateful,” he added.

Often, Bridges said he has to call the parents to prod the kids to list some toys they’d like because many times they just ask for clothes. “We’ll get them clothes, but we also want to get them some toys,” he said. “In the first couple of years when we actually took the children  shopping, some of them just wanted to buy stuff for their brothers or sisters and we had to encourage them to get something for themselves.”

Bridges said all the officers including the police chief typically are involved in delivering the presents. “Even third-shifters wake up early and come in for it,” he said. “Everyone looks forward to it.”

The officers deliver the presents as a group, driving to each child’s house in multiple squad cars.

“The kids get really excited. Imagine if you’re sitting at home and you see six or seven squad cars pull up in front of your house,” Bridges said with a chuckle. “We let them open the presents in front of us if they want to and we play with them for a little awhile. But if they’re older or seem shy about it, we just wish them a Merry Christmas and go on to the next house.”

Donations are accepted year round for the Cops for Kids program. Checks made payable to Chillicothe FOP Lodge 247 can be mailed to 823 N. Second St. in Chillicothe. For more information, visit the Chillicothe Police Department Facebook page or website at www.chillicothepd.org.