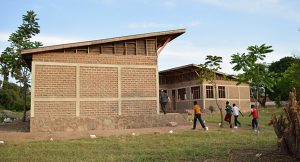 DeKalb County residents and organizations are working to fight poverty through education and books in a nation thousands of miles away.

Tanzania Development Support is a nonprofit organization based out of DeKalb that regularly holds fundraisers to pay for projects in the Mara region of Tanzania, an east African country.

The group recently held a multi-day yard sale, with items donated by the community, and the profits will help finish a computer lab project that was started by the organization. It’s the latest mission for the group, who has already furnished that area of Tanzania with a dormitory for students and a library.

“Health and education is a virtuous cycle,” said TDS founder Kurt Thurmaier. “People [in Tanzania] can learn about math, science, disease, family planning and more. So many dividends are paid through education.”

Thurmaier said the longevity of the organization, which has been active since 2009, is due in part to the story behind its creation.

Thurmaier met Leo Kazeri, of Tanzania, in graduate school in the 1980s in Wisconsin, and a friendship began between the two of them. Thurmaier and his wife Jeanine visited Kazeri, a Catholic priest, at his home in Tanzania in 2008 and were moved by the poverty in the Mara region.

Kazeri and the Thurmaiers worked to create a group of volunteers that could tackle these issues. Thurmaier, Northern Illinois University presidential engagement professor and chair, is able to use his connections to bring student volunteers, including Engineers Without Borders, to Tanzania with him every summer. DeKalb churches and other groups have also pitched in to the efforts over the years.

Tricia DeBoo, of Sycamore, has been involved with TDS since 2009, and has traveled to the Tanzania area three times to help with efforts.

“It seemed like a place where your donations would go far, and that’s what got me hooked,” she said. “Both the people here and the people there are so focused on making things better.”

The organization’s mission is “to improve the quality of life of youth, especially girls, in the Mara region by supporting primary and secondary school improvements and other community identified priorities.”

Thurmaier echoes the sentiment behind “especially girls.” The organization’s first project was building a dormitory for girls in 2009. They completed a second wing of the dorm by 2011.

“Boys are fairly privileged in that area,” he said. “Parents will send their boys to school, but not their girls. Every excuse will be used to not send a girl to school, such as she needs to take care of the home. The attendance rates always start out the same, but so many girls never finish school.”

That’s where the inspiration for the dormitory was born. If girls could stay in a dormitory, they would have time to devote to their education, Thurmaier said. After major fundraising efforts, including climbing Mount Kilimanjaro, $150,000 was raised for the construction of the dormitory, and the project was born. However, the dormitory was just the beginning.

Projects in the works

The group’s current goal is development of the Nyegina Library and Community Resource Center. These resources offer locals of all ages the opportunity to read, learn computer skills and more.

Throughout the course of these projects and improvements in the area, Thurmaier has seen one surprising result: the attitudes of men in the area are changing, and that’s a great start to lifelong change, he says.

Thurmaier also has his mind on a long-term goal: at least one book in every household in that region, within the next five years.

“You have to create a culture, a practice, of reading,” he said. “Reading is key to lifelong success and education. You have to learn how to read, and that reading is so valuable.”

Contrary to popular belief, though, the organization won’t be holding a book drive any time soon. Books printed in Swahili, not English, are needed, and it’s quite expensive to fly across the globe with a few pounds of books in your bags. The books will be purchased in Africa with money from fundraisers and private donations.

Thurmaier said he is always impressed by the hours and donations brought in to the organization by volunteers.

NIU student Taylor Adolphson traveled with the organization to Tanzania in summer 2015.

“The opportunity to have a conversation with people from another culture, that’s something you can’t understand until you do it,” she said. “To talk with people, you come to understand their situation and you want to help.”

Not all volunteers travel to Tanzania to make an impact, though.

Instead, Edmund-Solares Jaeger has been practicing his violin playing for a greater good.

The seven-year-old, from DeKalb, occasionally plucks at his violin to raise money for the organization, which is based out of the home of his neighbors, the Thurmaiers. His inspiration to help derives from his family, who offers their driveway for the organization’s large fundraiser yard sales, and some prodding from his mother.

“I had heard that you could encourage children to play an instrument by connecting it to a good cause,” Francis Jaeger said.

And Edmund is proud of his involvement, as he’s quick to point out that he has donated some of his own savings to the organization. During the yard sale August 20 in DeKalb, his violin case laid open with a few dollars inside. A sign inside of the case’s lid simply stated: “All donations are for Tanzania! [Sincerely] Edmund.”

“I’ve been trying to raise money to help, so that it’s not so bad there,” he said.

For more information on these efforts, visit www.tdsnfp.org.