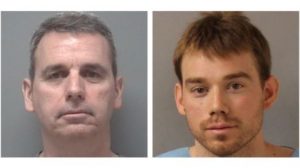 Jeffrey Reinking, the father of the man who shot and killed people in a Tennessee Waffle House in 2018, has pleaded not guilty to felony unlawful delivery of a firearm.

At 3:25 a.m. on April 22, 2018, Travis Reinking opened fire at an Antioch Waffle House, killing four and wounding two others. Reinking was armed with a Bushmaster AR-15, an assault rifle that his father is accused of returning to him between before he moved to Tennessee the previous November.

The assault rifle, along with two other rifles and a 9-mm handgun, were registered to Travis Reinking. In August 2017, his Firearms Owner Identification Card was revoked after he was arrested by the U.S. Secret Service for entering a restricted area near the White House in an attempt to meet President Donald Trump.

When the Tazewell County Sheriff’s department subsequently attempted to seize the guns, Jeffrey Reinking, who held a valid FOID card, intervened by vowing to secure them and keep them out of his son’s reach.

Travis Reinking was charged with four counts of criminal homicide, four counts of attempted homicide and one count of having a firearm while committing a felony. Forensic psychologists determined him severely schizophrenic, and he was deemed unfit to stand trial in August 2018. He was remanded to the Middle Tennessee Mental Health Institute in Nashville.

In 2016, the younger Reinking was treated at the mental health unit of Methodist Medical Center in Peoria following a string of bizarre events, some of which centered on his belief that country music singer Taylor Swift was stalking him and hacking his phone.

Illinois law forbids the sale or giving of guns to anyone who has been a patient in a mental institution within the past five years. Jeffrey Reinking’s attorney, Joel Brown, contends in the filing that it cannot be proved that Reinking made a gift or sale of a firearm to his son, and that the statute does not apply in Reinking’s case.

“Jeffrey L. Reinking was never the owner of the firearm in question,” Brown disputed. “At all times the firearm was owned by Travis Reinking.”

The Class 4 Felony charge was filed by Tazewell County State’s Attorney Stuart Umholz March 13, and Reinking posted $5,000 bond that day. He was arraigned April 25, and pleaded not guilty. If convicted, Reinking faces up to three years in prison and a fine. He is due back in Tazewell County Circuit Court on June 3.