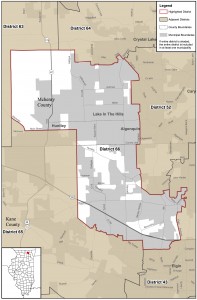 Squaring off in the March 15 GOP primary are: Carolyn Schofield of Crystal Lake, a McHenry County Board member and former Crystal Lake trustee; Paul Serwatka of Lakewood, a journeyman carpenter and Lakewood trustee; Allen Skillcorn of East Dundee, a marketing director and two-term East Dundee trustee; and Dan Wilbrandt of West Dundee, a prosecutor and West Dundee trustee. The primary winner will face Democrat Nancy Zettler of Algonquin in the November election.

Information on Schofield, Skillcorn and Wilbrandt was gained through individual interviews. Serwatka did not respond to repeated requests for an interview. His information is taken from his website.

Why did you decide to run?

Schofield: With Mike Tryon retiring, I am looking at the opportunity to do more to serve. Right now, it is a tough situation with the state budget and everything else. I have always been about making communities better places. … We are now talking at the county comprehensive plan level that kids are going outside the county and the state for their universities and they are staying there.

Serwatka: I have become rather actively involved in both county and statewide government. Not as an elected official, of course, but as a concerned taxpayer and, even more so, as a concerned resident of this county, this state … I just reached a point — probably inspired by my young children — that I just could not sit idly by and watch bad politicians and rogue government plunder away their future.

Skillcorn: The biggest reason why I am running is that we need to restore bipartisan government in Springfield. We need a stronger, healthier Republican Party to hold the Speaker of the House and the Democrats accountable. From Day 1, I would work on workman’s comp reforms, term limits, a fair (legislative district) map and pension reform.

Wilbrandt: I am a village trustee in West Dundee. As a small village, we have a lot of unfunded mandates, things we can’t really control and there is no one to pass the buck to. There were rumors about Mike Tryon not running again and a number of individuals asked if I would be interested, that I would do something about the issues in Springfield.

What needs to happen for there to be a state budget?

Serwatka: Problems have grown to epidemic proportions due to decades of neglect and inaction by those we have sent to represent us in Springfield. And while the pundits and politicians debate the issues and offer solutions, they seldom, if ever, talk about the root cause of the problem. Springfield has become a machine that has enriched and empowered a handful of corrupt, career politicians at the expense of the working families of Illinois.

Skillcorn: Right now, Speaker [Michael] Madigan is a roadblock to a budget. He has the votes. He could do it right now. We need a stronger Republican Party. Hopefully, a couple more Republicans will get elected and make us a stronger organization. We need to make suburban Democrats accountable. If we are stronger, we will be a more effective party. Even if we get within five or 10 points in some races, the suburban Democrats are going to have to vote their district, not for Madigan.

Wilbrandt: It is all tied together. It is all tied to finances. I want to see a property tax freeze, but we cannot make those cuts without doing other reforms. You make the freeze or cut taxes without the other reforms and you are tying small villages’ hands … The governor does not want to pass an overspending budget. The budget proposed was $3 billion or $4 billion overspent … It is one giant political game. We need to take a look at a logical step and don’t spend more than we have.

Schofield: They need to start realizing that this has to take place. There has not been the desire to sit down and work on a budget. We are starting the see the effects. We have to work off a balanced budget. Reality has to set in at some point that we need a budget. What we need is to give on each side. There are a combination of reforms, structural reforms that are needed. They have to come to an agreement in the middle. No one is winning right now.

Endorsements you have gotten:

Why should residents vote for you?

Wilbrandt: I have lived here my entire life. I represent the community from the bottom to the top. I am working for residents as a trustee and as a state prosecutor in McHenry County. I cover both halves 100 percent of the time. I will continue to represent residents in Springfield. Residents deserve leadership.

Schofield: I am by far the most qualified, most experienced candidate. I have local, regional and county experience. I am familiar with the governing process and know what it takes. I am an environmental engineer. That is a unique background for Springfield. I will go to work Day 1.

Serwatka: If I am elected to be our new state representative, I will serve no more than five terms. I will waive all pension benefits, I will fight, not just vote right, but really fight to restore legitimate, responsible, accountable government in Springfield. I will not be bought by lobbyists.

Skillcorn: The governor needs more allies like me. Look at the unproductive years in Springfield. I think term limits are the way to go. Term limits may not eliminate corruption, but they are a first step. As for fair maps, voters should pick their politicians, not politicians picking their voters.