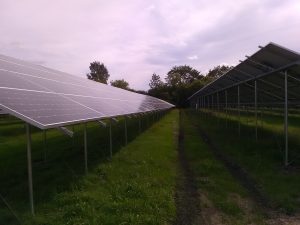 Rows of solar panels will collect the sunlight and be transferred to electric power. (Photo by Gregory Harutunian/for Chronicle Media)

In a concerted effort to save money on its electricity bills, Grayslake Community Consolidated School District 46 has undertaken a $7.3 million project that will place a solar panel array at four of its school buildings, and eventually extend to all seven educational facilities in their holdings. Solar panels have already been installed at Prairieview and Frederick schools, along with the Park School Campus in Round Lake.

Prairieview went online Sept. 8, with district operations personnel and representatives from Commonwealth Edison overseeing the hook-up, metering, and monitoring of the electric flow to the area’s power grid. The exact wattage generated by the solar field is still being calculated and study results will be available shortly. The solar panel field was placed behind the school building, facing south.

“The wattage for Prairieview School is under review, as it just got going, however it should be more than ample to for that building and grounds,” said Keith Grinnell, the District 46 operations and maintenance supervisor. “I think the solar array is quieter than wind-generated turbine power structures, and it’s the way to be going. We’re in the process of making a timeline for installation at the Grayslake Middle School, and as soon as it’s finalized, the work will be started by October, tentatively.”

Conversations about the potential of solar panel installations as a cost-efficient alternative to mounting electricity expenses began in 2016, with on-and-off discussions at the facilities and board levels. Acquiring factual information on the program’s viability proved to be the most time-consuming part element of the district’s investigations.

“They wanted to be certain that this was a positive direction for the district to take,” said Grinnell. “The plan was formalized, during the winter months last year, with solar fields for all seven schools. At this time, the solar filed is large, but not enough to generate power for all of them. This has been a fun project, and really something that will be beneficial to the district and the area.”

Frederick School, located at 595 Frederick Road, broke ground for its installation June 27, followed by Prairieview School at 103 Belvidere Road in Hainesville, July 14. Both sites were ground array constructions for the rows of solar panels. The Park School Campus at 400 West Townline Road in Round Lake also started construction July 14, although the installation was a roof-mounted array. The next project site is the middle school at 400 Barron boulevard in Grayslake.

Working at the Prairieview site Sept. 8, personnel for District 46 operations and maintenance were able to oversee and watch the project come to life, as the first meter readings came online. “It’s a process … we’ve been erecting and putting this together throughout the summer, and it will be connected into the power grid for the area,” said Frank Giannosa, helping with the hook-up. “We’re really excited because it’s a big project, and very unique.”

The educational components for students to monitor the progress of the solar panel arrays in generating power also potentially supply lesson plans to meet state curriculum standards pertaining to science, mathematics, and other applicable sections.

“We are looking forward to having this up and running throughout the district,” said Grinnell. “It’s good for the schools, good for the area, and good for the taxpayers.”