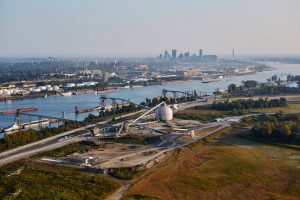 A burgeoning international seaport in Georgia could soon be sending millions more tons of finished merchandise, product components, and commodities to St. Louis and Metro East for distribution, warehousing or final assembly.

It could happen as early as next year.

Announcement of a tentative alliance between St. Louis-area freight industry interests and Georgia’s Port of Savanah was the highlight of the second annual St. Louis Regional Freightway Spring Industry Forum, May 22-23.

Already the largest single-terminal container facility in the western hemisphere and the nation’s third busiest container gateway, the Port of Savannah has launched a $3 billion expansion program to accommodate rapid growing in international freight.

The port serves all of the world’s major shipping lines and currently loads and unloads around 27 oceangoing freighters each week.  A record 4.3 million 20-foot multimodal shipping containers moved through the facility in fiscal year 2017.

Expansion will increase the port’s containerized cargo capacity from 5 to 8 million by 2028, officials say.

A new $220 million rail terminal — set for completion in 2020 — will be the largest port-side rail facility in North America, according to John Trent, Senior Director of Strategic Operations and Safety at the Georgia Ports Authority, which owns and operates the Port of Savannah. The expansion will roughly double the port’s railroad on- and off-loading capacity.

Norfolk Southern and CSX — the two major railroads linking Savanah and the American Midwest — are establishing a new “Mega Rail” service to expedite shipment between the port and a “Midwestern Arc” of rail yards in Memphis, St. Louis, Chicago and Columbus, Ohio.

CSX freight will be handled at the railroad’s East St. Louis railyard.

The alliance has potential to established St. Louis as a major new inland freight hub, according to conference speakers. 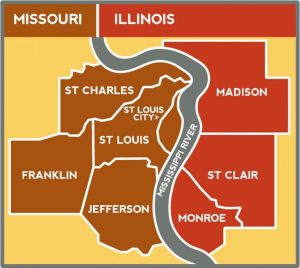 The Port of Savanah and its Midwestern Arc allies will now be prepared to join that group and complete successfully with them, speakers said.

“I cannot overstate the potential of this new partnership and the opportunities it can create to develop stronger links between our region’s world-class freight capabilities and national and global supply chains,” said Mary Lamie, executive director of the St. Louis Regional Freightway.

A division of the Bi-State Development Agency, The St. Louis Regional Freightway was formed to create a regional freight district governmental authority for freight operations within eight Illinois and Missouri counties which comprise the St. Louis metropolitan area.

Savanah and its Midwestern allies will provide an increasingly attractive new option for importers, particularly those now bringing in merchandize through the West Coast, according to Trent.

And the St. Louis area should compare favorably with the three other inland cities in the Mega Rail system, several conference speakers said. Once freight arrives in St. Louis, it can generally be delivered by truck to most other major Midwest shipping destinations by truck with in a day, they noted.

Compared with other existing freight hubs, recent research finds costs to shippers using the St. Louis route will be $300 to $400 less for each container moved, and the total time in transit would be comparable, Trent said.

In addition, the St. Louis area will offer greater “consistency,” Trent believes.  Delays and disruptions have long been a bane of the shipping industry, conference attendees noted. 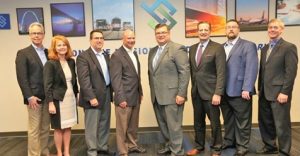 Shippers are likely to find St. Louis and East St. Louis favorable alternative to Chicago; where freight bottlenecks have become a widely-recognized problem, according to conference speaker Matt Freix, Regional Vice President for DNJ Intermodal Services, also participated in the special tour on May 22.

The St. Louis region is already the third largest rail hub in the central United States, with four intermodal yards all having close proximity to all modes of fright transportation. Those modes include the nation’s third largest inland port.

St. Louis is 350 miles closer to the Port of Savannah than any other major East Coast gateway; making the Georgia port a sensible partner for the Gateway City, Trent said.

Terms of the proposed agreement were not announced during the conference