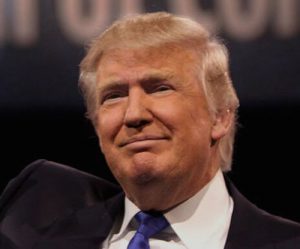 One of Donald Trump’s lawyers told me 15 years ago that threatening lawsuits was much better than actually suing.

So, he wrote a lot of letters, and made a lot of phone calls.

If somebody digs in their heels, you can go to court. Or you can back off, Diamond said. There is no shame in that. These things rarely get in the newspapers.

As president, Donald Trump hasn’t seemed to depart from this pattern. When his bluff is called, he shows no compunction about abruptly shelving prior demands and threats. Then, no matter the result, he just says that he made a wonderful deal for the American people.

But now, it all actually does get in the newspapers.

That doesn’t matter to some folks, of course. A POLITICO study a year ago indicated that, in general, the fewer newspaper subscriptions in a county, the more people support Trump.

But among the people who do keep up with the papers are those who make decisions in foreign capitals. They even hire people to translate them.

So, if you’re the head guy in Tehran, Ayatollah Ali Khamenei, you know that Trump eased off on North Korea after reporting that progress had been made with that country’s nuclear disarmament, though no such progress had actually occurred.

So that was probably a recent goal for Iran, too. That country had a genuine signed 2015 anti-nuclear agreement with the United States and other nations. Trump flushed it last year and ordered sanctions instead.

But after reading about Trump’s past performance, the ayatollahs don’t likely feel compelled to come in on their knees as they might be in his imagination.

Now the Iranians may be guessing that they, like the North Koreans, can have a fake agreement, too, and get their sanctions lifted.

They had seen that North Korea had precipitated Trump’s initiatives by setting off two scary tests, a nuclear bomb and a ballistic missile. But there wasn’t any nuke in the Iranian toolbox, maybe because of the 2015 agreement.

So, they started doing other things calculated to cause a lot of angst.

They started on May 8, the one-year anniversary of Trump’s pullout from the Iran nuclear deal. Iran announced it would soon increase uranium production.

The U.S. responded by sending a U.S. Navy carrier group to the area.

May 12, the Iranians attacked four oil tankers near the Strait of Hormuz.

Two days later, Iran-backed Houthi rebels from Yemen used drones against two Saudi Arabian oil-pumping stations. Saudi Arabia, an American pseudo-ally and a favorite of Trump and both Bush administrations, has been fighting a war against the Houthis in Yemen, but had previously sustained relatively little violence on its own turf.

On the same day, Trump had a wide-ranging impromptu press conference, in which he seemed to relate that in spite of indications, everything was still hunky-dory. He was quoted as saying, “So, Iran has got a lot of problems, and I’d like to help them with those problems. We’ll see what happens.”

Prime Minister Shinzo Abe of Japan, which buys a lot of oil from Iran, arrived in Iran June 13 to meet with the ringleaders there. He was apparently trying to be the big customer telling the supplier to be cool, and do what the Americans wanted.

Before the day was out, a Japanese tanker, and another one from Norway, were on fire.

Trump at first tried to pass it off as possibly accidental, which would have given him the opportunity to avoid striking back if the Iranians didn’t contradict him. They did.

But we now know that Trump had actually ordered a retaliatory attack on Iranian military targets and called it back 10 minutes before launch. He maintained that he suddenly realized the estimate of Iranian casualties was 150, and that was not a “proportional response” to the drone attack.

What he truly realized, I suspect, was that Iran would not suffer in silence. And whatever counter-measures they took, they might be the kind that could seriously damage the security of the region, and more significantly to this president, draw the curtain on Trump 2020.

Trump could have immediately searched for a way to defuse the situation, perhaps through an intermediary nation in oil-hungry Asia. But he doesn’t have a lot of friends there, and the last one got burned.

He also reached out to Saudi Arabia, other Arab kingdoms, and Israel, all countries with leaders who would like to see Iran sink into the Persian Gulf with as few bubbles as possible.

He quietly ordered a cyber-attack on the Iranian military. Iran did not apparently respond immediately, quietly or noisily.

Then Trump threatened that if the Iranians attack “anything American” he would strike back with “great and overwhelming force,” which might, in some areas, mean “obliteration.”

Some might take that to mean that the Iranians can pick on other countries as much as they want, but the U.S. won’t be warming up the F-16s.

Some might also assume that the only thing the Iranians can do to get Trump’s attention is to indeed attack something, or someone, American.

And then, Trump would have something to prove. Or not. Who can tell?

Threats are only valuable if the threatened parties believe you’ll follow through.

If they don’t believe you’re serious, you may have to actually demonstrate to them that you are. And I don’t think anyone wants to see any obliteration.

If Trump avoids a full-blown shooting war over this, he’s unlikely to be widely congratulated, because he got us into this fix. If he had tried to build on the 2015 deal, he might be clearly on the way to an actual foreign policy accomplishment now.

The possibility of him staving off doom from a conflict he precipitated is reminiscent of the dark old joke about the boy who killed his parents.

He threw himself on the mercy of the court because he was an orphan.