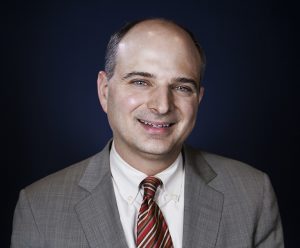 Noah Bookbinder of Citizens for Responsibility and Ethics in Washington said he went to court to force President Donald Trump to abide by the terms of his oath. (CREW photo).

Trump and his lawyers and other lackeys keep reminding us that “the other side” started talking about impeaching Trump before he even took office.

They make it sound like that was a bad thing.

Anybody who was paying attention could have known from the start that impeachment was likely to be down the road. You don’t have to be Nostradamus to see that bad boy coming.

I know a guy named Noah Bookbinder who filed suit against Trump moments after he took the oath of office. The suit was probably one of the more inevitable legal actions ever taken in Washington, D.C.

Bookbinder and his organization, Citizens for Responsibility and Ethics in Washington, maintained Trump was in violation of the oath as soon as he stuck his hand in the air. There are now a total of three similar lawsuits, which have survived several attempts to dismiss them.

“The President’s decision to retain his massive global business interests means that he has faced potential conflicts of interest in decisions he makes on a daily basis on a wide variety of issues,” CREW chief Bookbinder wrote to me two years ago, when I was doing public relations for an Illinois group that invited him to speak.

“It also means that he violates the emoluments clauses of the Constitution — important provisions included by the framers to protect against corruption by foreign powers and against states currying favor with the President — on a regular basis.”

The ban on presidents accepting foreign emoluments — profits, benefits or any other kind of advantages from foreign officials — is not an obscurity tucked into a dark and lonely corner of the Constitution. It’s in Article I, where you can also find the road map on setting up the government. The common defense. The general welfare.

All the other presidents within recent memory made sure they wouldn’t run afoul of the ban. They put their assets into blind trusts. Even if we were to decide Trump should get special dispensation — I don’t know why — he could at least have assigned someone independent to run his outfit, instead of his own little boys.

After Trump moved into the White House, one would think that The Trump Organization would, for the sake of appearances, if nothing else, at least steer clear of doing business with the White House itself. Also, one would think we’d see avoidance of other U.S. government entities, and new foreign business beyond existing Trump international hotels.

One would think incorrectly.

CREW has kept track of Trump’s larger conflicts of interest since the inauguration. So we know that, as of this writing, there have been 130 visits by foreign officials to Trump facilities, 1,681 visits by U.S. government officials and 199 Trump-ordered U.S. government events held at Trump dumps. In all, 2,862 documented conflicts of interest, according to CREW. That’s more than two per day.

Trump was elected in 2016 without taking his home state, a rare occurrence. New Yorkers knew him too well.

If they read the New York Times or The Village Voice, they may have noticed in 1984 that Russian crook David Bogatin, 38, plunked down $6 million for five condos in Trump Tower. Three years later, Bogatin pleaded guilty to participating in a huge New York gasoline bootlegging scheme, in which the Russian mafia and the regular mafia had teamed up.

The state seized the condos to pay off evaded taxes. Nobody was living there anyway, according to the government, because the purchase was a money-laundering scheme.

Bogatin skipped town, and got busy defrauding Europeans. In 1992, Poland sent him back to New York so he could spend a little time in a locked building.

Trump’s interest in selling stuff to bad guys never flagged. The total he had accepted from anonymous or other mortgage-shunning buyers exceeded $100 million, as reported prior to his election.

By my count, 16 women accused Trump of sexual misconduct before his election, telling of grabbing and kissing and groping. All of the descriptions of the incidents sounded worse than those attributed to Minnesota Sen. Al Franken, who resigned.

Trump did not, of course, resign. Instead, a month before the election, he just called all the women liars, and threatened to sue them.

Most of them got real quiet after that. None seemed to be obviously after Trump’s money, so there was no percentage in keeping up the fight. I guess they figured their lives would run smoother if they just stopped taking reporters’ calls.

They were unaware, most likely, that Trump threatens to sue a lot more than he actually does it. It’s cheaper and more effective, one of his lawyers told me 15 years ago.

Of course, two women who actually agreed to sex with the married Trump did take his money, it was also revealed prior to the election. His lawyers were very involved.

Even Alan Dershowitz, one of Trump’s current lawyers, could see impeachment coming years away. When asked in 2016 about possible Hillary Clinton conflicts involving the Clinton Foundation, he said, “When you compare that to what Trump has done with Trump University, with so many other things, I think there’s no comparison between who has engaged in more corruption and who is more likely to continue that if elected president of the United States,” Dershowitz said.

The pre-election evidence of Trump University fraud seemed unassailable — the uncertified institution had even been forced to stop using the name “University” — as motion calls for the three lawsuits against it proceeded through 2016.

As the election approached, a frustrated Trump vowed to never settle. He lashed out at U.S. District Judge Gonzalo P. Curiel, calling him both “Spanish” and “Mexican,” and therefore biased against the man who had referred to Mexican immigrants as drug dealers, murderers and rapists. Curiel, born in East Chicago, Indiana, ignored Trump’s comments.

Trump wound up settling all three cases for $25 million two weeks after the election.

Trump was well-known in New York for refusing to pay bills, then using his lawyers to grind down hapless contractors. One of his victims described his fate in a Hillary Clinton campaign commercial which became little more than a footnote to history.

Chronicle Media gives me a lot of space, but not enough to recount all the possible justifications for Day 1 impeachment.

But there’s enough room here to ask one question.

Did you ever think you’d read anything like this?