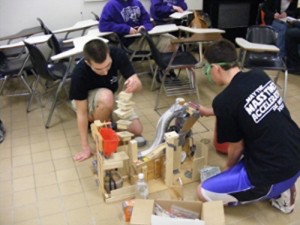 Science Olympia
Southern Illinois University Edwardsville hosted approximately 450 STEM (science, technology, engineering and mathematics) –motivated students, grades 6-12, at the annual Science Olympiad regional tournament, Feb. 13. Students from 21 different schools across the region competed in the day’s interactive, hands-on events. Illinois is a leading state in the Science Olympiad national program. SIUE’s event is one of nine regional competitions in the state. Leading teams from each regional tournament will advance to the State Tournament at the University of Illinois at Urbana–Champaign, April 16.  (Photo from Southern Illinois University Edwardsville)

St. Clair County sustained $2.1 million in losses as a result of flooding at the end of December and the beginning of January, according to the St. Clair County Emergency Management Agency. Just under 200 homes have filed flood-damage claims, most for flooded basements, damaged foundations and property loss.  The waters ranged from 2 inches to 3- to 4-feet high.  The agency started working with other organizations, including the Small Business Administration, the Illinois Emergency Management Agency (IEMA) and the Federal Emergency Management Agency (FEMA), to assess the damage during the last week of January and completed its post-flooding damage assessment review Feb. 7.  All Illinois counties were required to submit damage reports to the IEMA by Feb. 12 in order to be considered for federal flood recovery assistance.

To qualify for the federal assistance, the entire state must document $18.1 million in flood damage. St. Clair County had to meet $900,000 to be considered for the overall relief package.

The date for FEMA’s decision has not been set.

The population of Edwardsville has increased 25 percent since 2000 and the rapid growth is likely to continue, according to the Edwardsville Business Forecast, presented Feb. 4 at the Wildey Theatre. Median household income on the city is now $70,000 – $13,000 above the state average of $57,000. Some 5,000 new jobs have been created in the town over the past 10 years, according to speakers. Fully 50 percent of Edwardsville adults over age 25 have a college degree – compared with 31 percent statewide – and 96 percent have a high school degree diploma – compared with 87 percent statewide.

Speakers credited the city’s prosperity and population growth to Southern Illinois University Edwardsville, the Edwardsville School District, burgeoning business developments such as the Gateway Enterprise Zone, and the city’s array of shops, restaurants, and amenities.

The St. Louis Planning Commission has approved plans for The Discovery Pier center, a $250 million, multi-phase, commercial-residential development across the Mississippi River from Granite City, just north of the I-270 bridge.  Centered around a 60-foot decorative lighthouse, the development will ultimately include a hotel, restaurant, marina, visitor’s center, retail space, event center, gas station, a bike trail connection to the Great Rivers Greenway, and perhaps condominiums and offices. The development site is the former location of the North Shore Golf Course, which was inundated in the flood of 1992. Developers have spent eight years, raising the site 20 feet above the surrounding floodplain. Construction of the $50 million first phase is to begin this spring.

The owners did not ask the city for any TIFs or tax breaks, although they have indicated they may ask for creation of a Transportation Development District to raise money to pay for some roadwork.

Madison County voters will soon be able to cast early ballots for the March 15 primary election. The early voting period for the 2016 General Primary Election is Monday, Feb. 29 through Monday, March 14. Early ballots will be accepted at a total of 11 county polling places, with voting all week long at three.

Hours will be expanded at most locations during the second week of March. Voters do not need to present a government issued photo to vote, according to Madison County Clerk Debbie Ming-Mendoza.  Identity is verified using a signature match. Early votes will not be counted until after the polls close on Election Day.

For additional information the clerk’s office at (618) 692-6290 or visit www.co.madison.il.us/departments/county_clerk/elections/early_voting.php

A federal court judge in East St. Louis has cleared the way for testimony by prison guards and other state employees in a lawsuit charging systemic humiliation and harassment of inmates by guards at the Menard prison.  According to the suit, a corps of guards, known as the “Orange Crush” for their orange jumpsuits, regularly forced male inmates to parade without clothing in tight formation, while guards jeered. Attorneys have not yet indicated which state officials might be called to testify. The federal court ruled last week that guards and officials could not be prevented from testifying because the names of all inmates involved were not specifically listed in the lawsuit.