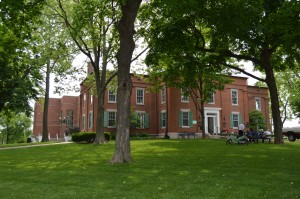 It seldom draws the public attention garnered by neighboring areas of Illinois and Missouri, but Monroe County launched its bicentennial celebration last month as a quiet success story within Metro-East and the greater St. Louis area.

While many sections of the bi-state region continue to lose population and businesses, the area best known among St. Louisans as the home of Waterloo German Band is quietly prospering as an increasingly affluent exurban bedroom community and business location, which has also managed to maintain its agricultural economic base.

Monroe County’s population is expected to reach 36,000 for the first time this year, according to County Clerk Dennis M. Knobloch; continuing a string of double-digit percentage increases over most of the past half century. The population grew 23.2 percent during the 1990s, reaching 27,619 in 2000; then another 19.3 percent to 32,957 by 2010, according to U.S. Census data.

Census data also shows median household income in Monroe County is the second highest in the St. Louis region, trailing only rapidly-growing St. Charles County in Missouri.  Median household income in the Monroe County is $68,253, with the median income for a family placed at $80,832 and per-capita income at $31,091 – all well above national, state, and St. Louis area averages. Only 4.5 percent of Monroe County residents are below the poverty level, a rate matched by only a handful of counties across the nation

While an aging population has become an issue in the city of St. Louis and across much of Southern Illinois, the median age of a Monroe County resident is 41.0 years. Of the 12,589 household in the county, 34.7 percent have children under the age of 18. Of those over age 65, only 2.4% are below the poverty level.

Monroe County business leaders credit proximity to St. Louis as a primary factor their county’s growth. The county is accessible by five major state or federal highways, notably I-255 which connects it directly with St. Louis County, by way of the Jefferson Barracks Bridge across the Mississippi River.

However, they also credit a highly rated education system, with above average high school graduation rates, and the Beck Area Career Center near Hecker, which provides a unique workforce training program.

Well over half of Monroe County wage-earners work in St. Louis or St. Louis County, with most of the rest bringing home paychecks from St. Clair County.

To establish a stronger local employment base, the Monroe County Economic Development Council (MCEDC) is attempting to encourage development in targeted fields such as healthcare and food processing.

Perhaps indicating some success is the planned $10 million 11 South Project in Columbia. The five-story, 59,395-square-foot professional office building will be situated to provide views of the river, the Jefferson Barracks Bridge and downtown St. Louis, according to Korte & Luitjohan Contractors, which was last week named the construction manager for the development.

However, county leaders are hoping the bicentennial, as well as events such as the new May Music and Market Festival in Waterloo, will help to raise additional awareness of the county among both potential residents and business interests/

Monroe County’s 200th anniversary kicked off Jan. 16 with a Bicentennial Birthday Bash held at the Hecker Community Center on January 16.  Other events planned for later this year include:

June 21 – Placing the Bicentennial plaque on the Courthouse at the Porta Westfalica Fest.

Aug. 6 – Bicentennial-Paloooza – a day of demonstrations, music, and celebration to commemorate the speech given in Waterloo by Abraham Lincoln on Aug. 25, 1840.

Oct.  7 – Naturalization Ceremony at the Courthouse.

Nov.  27 – Dedication of a Bicentennial Time Capsule, placed in a compartment at the Monroe County Courthouse, with items gathered from around the county this year.