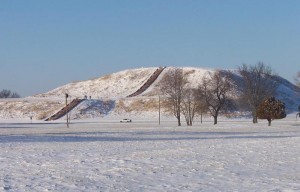 “Connecting ancient and today’s communities” is a key concept for the Mascoutah-based Heartlands Conservancy, which is hoping to convince Congress to designate the Cahokia Mounds State Historic Site near Collinsville as a National Historical Park.

Development of the proposed Mississippian Culture National Monument and National Park would be the focal point of a regional effort to protect valuable archeological sites, spur environmentally friendly economic development, and increase understanding and awareness of an ancient Native American civilization that established “America’s First Cities,” according to Ed Weilbacher, the conservancy’s executive director.

Under the conservancy’s proposal, the historic site would remain a state park, but operated under the auspices of the National Park Service.

The Cahokia Mounds Historic site represents the remnants of the most sophisticated prehistoric Native American civilization known to exist north of Mexico. At its peak around 1250, Cahokia was one of the greatest cities in the world; larger at the time than London. It was the center of a vast network of Native American communities spanning not only most of the Greater St. Louis region but what is now the Central United States.

Today, only the landmark Monks Mounds, a familiar sight to motorists on I-55 in Madison County, is the sole survivor among the 120 that once stood on Cahokia Mounds Historic Site. A lone mound in South St. Louis represents the only other remaining among the 550 which dotted what is now Greater St. Louis.

The rest generally fell victim to land development in 1800s. (St. Louis was commonly called “Mound City,” as late as the mid-1900s for the vast array of Native American mounds in the area.)

However their influence can still be seen today, as the mounds and the network of trails that connected them became the basis for many communities and travel routes across Greater St. Louis.

And therein lies a key to the Heartlands Conservancy’s plans.

A feasibility study completed by the conservancy in 2014 calls for extension of the existing Mounds Heritage Trail around the Cahokia site to connect with former mound sites to across the bi-state region – starting with seven historically significant sites from the present-day community of Mitchell, just north of Granite City, south to Lebanon and Dupo.

An interpretive center would be established at a recently discovered archaeological site on the former grounds of the St. Louis National Stockyards. Other sites would have at least signage explaining their significance. Eventually, the conservancy hopes to have markers at former mound sites across the St. Louis region.

All of that, the conservancy believes, will help spur not only greater public interest in the area’s ancient Native American communities but additional formal archeological research on them.  A number of significant artifacts have been unearthed at the National Stockyards site.

Meanwhile, the conservancy and the Cahokia Mounds Museum Society are hoping to upgrade the interpretive center and other facilities at the existing 2,200-acre Monks Mound site near Collinsville.  The society is eyeing purchase of 1,000 adjacent acres.

Cahokia Mounds has escaped many of the cutbacks endured by many other state parks and tourism facilities this year. Outdoor areas remain open to the public every day. However, the interpretive center this winter went to its shorted five-day-a-week operating schedule two months early and could remain on that schedule through at least June.

The museum society last year turned to gofundme.com to cover the $7,000 cost printing visitor brochures for the site.

Incorporations into the National Park system could help ease local and state-level costs at the site.

The conservancy is now attempting to form a broad-based coalition to support its National Monument proposal.

Funding for the feasibility study came from such St. Louis area heavyweights as the Great Rivers Greenway, The Kemper Foundation, and Waste Management, Inc., as well as the Illinois Archaeological Survey.