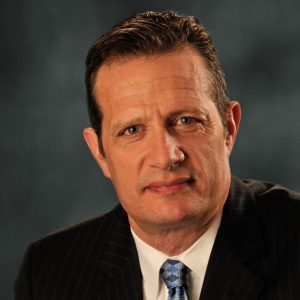 Improved security on MetroLink light rail lines is now the top priority for the Bi-State Development Agency, according to new president and CEO Taulby Roach.

Roach, who for the past 20 years has been instrumental in developing mass  transit across St. Clair County, officially took the reins of Bi-State Development, the St. Louis area’s regional mass transit provider,  on Jan. 1.

Although Roach cited “security, security, security” as his “top priorities” during a Dec. 21 news conference, announcing his new position, he will likely also be under pressure to increase ridership on both Bi-State buses and light rail trains – which decreased 20 percent (about 2 million passengers) from 2013 to 2017, according to agency data.

Without a tax increase, Bi-State will be unable to maintain its present transportation operations, the report warns.

The report stipulates the EWG —the federally recognized regional planning authority for the eight-county St. Louis area — should not approve any new federal funding for Bi-State, until the fiscal stability of present operations can be assured.

Security concerns have arisen following a series of violent incidents on MetroLink trains and boarding stations — including those in Washington Park and Fairview Heights.

In an unprecedented move, the St. Clair County Sheriff’s Department is now assigning deputies to patrol MetroLink trains in St. Louis and St. Louis County — with those deputies expected to have full arrest powers granted by both the State of Missouri and the St. Louis Board of Aldermen early this year.

Roach, who for the past year-and-a-half has served as chief financial officer (CFO) for the St. Clair County Transit District, was hired by the Bi-State Board of Commissioner during a Dec. 13 special meeting.

He succeeds Chesterfield, Mo.  attorney John Nation who left Bi-State on Jan. 1 after leading the agency since October 2010. 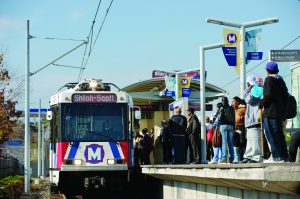 After serving as a long-time consultant to the St. Clair County Transit District, Roach was hired for the newly created staff position of CFO in 2017, to help provide ongoing financially stability following, according to district board minutes, a period of financial issues.

Bi-State operates bus and light rail services across the City of St. Louis, St. Louis County, and St. Clair County — which provide the bulk of its operating revenue; primarily through dedicated taxes.

Bi-State also operates trams and attractions at the Gateway Arch, the St. Louis Downtown Airport in Cahokia, the St. Louis Freightway program to develop shipping and distribution activities around the region (including the I-55 Corridor in Edwardsville), a public arts program, and a policy think tank known as the Bi-State Development Research Institute.

Maintaining the iconic Eads Bridge is within its jurisdiction.

Originally established Congress in 1949, under an interstate compact, to develop what is now known as the America’s Central Port in Granite City, the agency continues to operate the Bi-State Development Agency Port within the complex.

In all, the agency is authorized to provide services in the City of St. Louis and seven adjacent counties: Jefferson, St. Charles, and St. Louis counties in Missouri, and Illinois’ Madison, Monroe and St. Clair counties.

Privately, Bi-State personnel say a move is on to bring in Franklin County, Mo., just west of St. Louis County.

Over the past three years, the agency changed its popularly-used tradename from “Metro” to “Bi-State” in an effort emphasize on services to Metro East.

Bi-State’s 10-member board consists equally of representatives from Missouri and Illinois. In Missouri, the governor selects members of the board, and in Illinois, county board chairmen for St. Clair and Madison counties appoint their representatives.

Roach is believed to have the support of St. Clair County Board Chairman Mark Kern, who attended a number of Bi-State selection committee meeting for the CEO post, along with St. Louis Mayor Lyda Krewson and St. Louis County Executive Steve Stenger.

The month, the EWG is scheduled to release a study on MetroLink security.

During the news conference, Roach said he hopes to use the study as  a guide for better deployment plans of police and security-officer patrols. Roach said the study likely call for some type of controlled access system at station entrances and increased ticket checks on the trains.

Bi-State is expected to release it “Re-envisioning Metro” strategic plan for transit system in February. The plan reportedly may call for expansion into new forms of transportation services such as Uber-type ridesharing.

Roach is expected to begin outlining his specific plans for the agency during its Feb. 22 board of commissioners meeting.