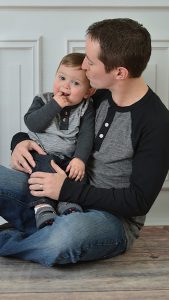 Garrett Hummel hugs his son, Calvin, now in good health after a kidney donation 16 months ago that gave him a second chance at life.

At first glance, Calvin Hummel of North Aurora is a typical 3-year-old kid.

He enjoys running in the park, visiting the children’s museum and playing with his little baby brother, Henry. Calvin also just learned to ride his first bicycle and likes “cooking” food in his toy kitchen, according to his mom, Heidi Hummel.

But 16 months ago, the prospects of Calvin enjoying a normal life were uncertain until a kidney transplant offered a second chance.

The family found a match in the first person tested—Calvin’s dad,  Garrett. And after eight days, post-transplant Calvin was released from the hospital.

Aside from receiving daily medication, all of which Calvin can name, and being fed by a feeding tube, Calvin is your normal toddler.

“Looking at him you would never know everything he has been through,” said Heidi Hummel.

Calvin came down with the flu when he was just 10 months old and his concerned parents brought him to the emergency room fearing that he was dehydrated.

Tests revealed that Calvin was actually suffering from kidney failure.

Referred to Lurie Children’s Hospital of Chicago, the family met with the hospital’s pediatric nephrologists. Genetic testing showed that Calvin had infantile nephrotic syndrome as a result of a mutation of the WT1 gene.

In early 2015, Calvin underwent three surgeries.  In April 2015, he had his kidneys removed because they posed a threat of forming cancerous tumors.

“Calvin’s kidney function was only 10%,” Heidi said.  “His disease unraveled more quickly than we anticipated that it would. Initially, we thought Calvin would be years from needing a transplant. We were sadly mistaken.”

Dialysis had now become a regular reality for Calvin and his parents.

After a two month hospital stay, Calvin returned home, but would return to the hospital that was more than an hour away from home for times weekly for dialysis.

The Hummels were reluctant to ask others for help, but they did hear about a Bloomington, Ind. organization that helped families raise funds to cover costs involved with transplant surgeries, Children’s Organ Transplant Association,

Since 1986, the Children’s Organ Transplant Association (COTA) has helped organize and guide communities in raising funds for transplant-related expenses. 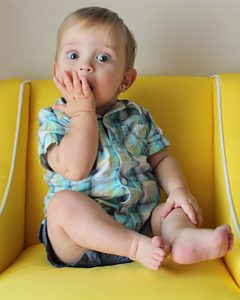 A younger Calvin Hummel looks surprised as he sits for a photo.

The group was started after a group of volunteers joined together to raise funds for a child in need of a liver transplant, according to Rick Lofgren, the president of COTA.

“At that time, insurance typically did not liver transplants so the group of volunteers did what local volunteers are doing for the Hummel’s today—they held fundraising events,” he said.

Today, COTA has raised more than $100 million dollars and has helped more than 3,000 children receive transplants.

Even with insurance, families can face significant transplant-related expenses, Lofgren said, that can include medication, transportation, and lodging.

Every dollar raised with the aid of COTA goes directly to the child in need—there are no administrative fees taken out, Heidi added.

These out-of-pocket expenses add up to tens of thousands of dollars annually for transplant families with lifetime totals exceeding $1,000,000.

Between Calvin’s hospital release in May 2015 and his February 2016 transplant surgery, he had so many hospitalizations that his mom Heidi took a leave of absence from her teaching job.

This happens frequently when a child is sick, Lofgren added. “In these instances, the family’s expenses go up and their income goes down.”

During Calvin’s 11-week hospital stay, the family realized that Calvin’s medical condition would impact him for the rest of his life, and they decided to fundraise for Calvin’s future medical expenses.

Nearly $90,000 has been raised for Calvin’s care through about a dozen local events from dueling pianos to bake sales.

The money that has been raised has been used to pay for Calvin’s medication and his portion of health insurance, Heidi added.

Even with his transplant completed Calvin will need care for the rest of his life.

“It is not unusual for families to have costs up to $10,000 per year after a transplant for the rest of the child’s life,” Lofgren said.