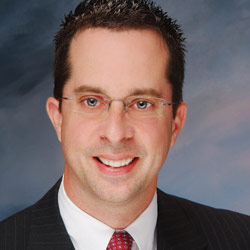 When the ball drops on 2016, the State of Illinois may not head into 2017 with a balanced budget, but Peoria, Tazewell and Woodford counties plan to despite the hurdles.

In the face of a continuing budget crisis in Springfield, these county boards must take a hard look at finances and make tough decisions to keep from piling on debt and spiraling into deficit spending.

Here is a look at how neighboring counties in the region plan to stay in the black in a state that’s in the red.

Peoria County
Just after the November elections, the Peoria County Board launched its budget hearings and the outcome was grim. Within three years, the county would deplete it’s reserve and begin operating on a deficit. Hard measures had to be taken.

“We ask each year that the departments submit a budget request, with both revenues and expenditures,” Peoria County administrator Scott Sorrell said. “We added them up and there was a deficit of $3.5 million.”

Already $1 million short in revenues, Sorrell said even a reduction from $3.5 million to $500,000 will still result in a deficit by 2020. The general fund is funded by property tax, he said, money that rolls in from June-October. The remainder of the year, the county relies on that money to pay employees, vendors, and for services; there can be no I.O.U.s.

So they made tough decisions — choices some county officials claim are knee-reactions to the pending budget woes. On Dec. 1, the county board approved a budget which included a 2.37 percent increase in property taxes and a sizable number of layoffs.

By March 31, it’s likely around 50 county employees will be laid off. Sorrell said the county has not finalized who will be cut, and there may be a Voluntary Retirement Incentive, reducing the number of employee layoffs.

In the meantime, Sorrell said the county board has implemented a finance committee that will begin meeting monthly in 2017. For the long-term, he said the county will adhere to a multi-year strategic plan, which includes infrastructure stewardship, effective service delivery and workforce development. 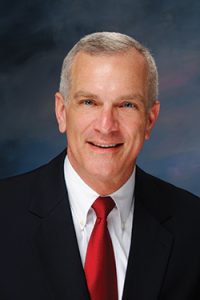 “We want to do what we’re statutorily mandated to do and we’re going to give good basic county government.”

“We have the lowest tax rate, no debt, strong fund balances and we’re a tax cap county,” he explained. “The biggest issue is the State of Illinois and the moneys (there) are, by law, to pay us. These are funding sources that we’re counting on that may not be there.”

This problem is compounded, he said, by unfunded mandates handed down by the state, such as reducing the mandated number of jurors while increasing their pay. “They’re shorting us on money they owe us, and they continue to send these mandates,” Zimmerman said.

Each county department cut its budget by 10 percent to prevent deficit spending. These cuts will mean making frugal decisions in 2017, he said.

“For instance, the roads, what’s the priority? The state is hanging on to our money, so we’re looking at the chip seal stuff,” Zimmerman said. “It’s not the regular asphalt, but instead of doing it the best way, we’ll have cut corners. That’s not how we like to do things, but we’ll have to for now.”

County has formed an ad hoc finance committee that will meet monthly after Jan. 1. “We’re going to make good use of our resources. The committee will watch what’s going in and coming out, and shift things in midstream, if necessary,” Zimmerman said. “We’re determined to find ways to save money.”

Diligence on expenditures and spending habits, that’s what Woodford County Board chairman Stanley Glazier said is the priority for the county in 2017. 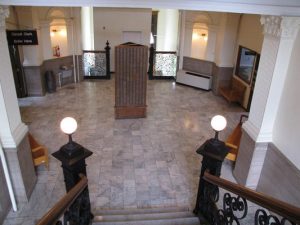 Woodford County Board Chairman Stanley Glazier said one matter at hand in 2017 is repairs to the Woodford County Courthouse roof, where leaks threaten to damage the interior of the historic building. (Photo by Holly Eitenmiller / for Chronicle Media)

“We need to make sure we are not raising taxes unless it’s absolutely necessary,” he said, explaining that the county board will maintain a holding pattern in its budget, and focus on projects that must be addressed in the coming year.

“I know that our highway department is starting to look at resurfacing County Hwy. 13, between Rte. 24 and 117 going through Roanoke,” he said. “It’s a very narrow roadway and it’s not set up for the 80,000 lb. highway weight limits.”

Glazier said the courthouse roof is in dire need of some repairs involving leaks that threaten the integrity of the historic building.

“The big ticket item is the roof repairs. The HVAC is not ideal and there are certain leaks that if we let go much longer, will degrade the building,” he said. “We’ve done so much work on the inside on floor restoration and woodwork. We don’t want to lose any of that.”

Also on the radar is the 1 percent sales tax, which was implemented to fund the jail.

“That comes to fruition at the end of this year, and the issue will be whether to maintain it, reduce it or eliminate it,” Glazier said. “The downside of reducing that tax is that it helps the sheriff’s department with some of their funding issues.”

Eliminating the tax, however, would help such businesses as Martin Brothers, who sell farm equipment. A 1 percent sales tax can increase the cost of some machines as much as $3,000, enough, he said, to propel buyers to another county to make the purchase.

“We’ll make the decision to possibly put that on the referendum next year,” he said. “We’re in the early stages of that and we’ll start discussions about this in next month’s finance committee meeting.”

The county will begin publishing its minutes and board packets on its website, Glazier said. “We hope to have everything set up in a couple of months so that it will be easy to navigate as far as anything to do with county business,” he said.