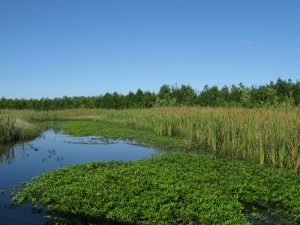 The Silver Creek wetlands are considered by environmentalists to be critical to the overall ecology of Metro East, but sections may be targeted for development.
(Photo courtesy of Heartlands Conservancy)

Commercial and residential development is picking up across Metro East — so is the development of the public infrastructure to support it.

With all that in mind, the East West Gateway Council of Government (EWG) this month introduces its Ecological Data Inventory. The  unique compendium of geologic, geographic and related data is designed  to provide public sector planning officials and private sector site selectors a practical way to accurately assess the environmental suitability of land for development.

Culled from a wide range of federal, state, local sources, the inventory either provides directly information virtually every acre of land in the eight-county St. Louis area — or way to easily access it online.

The volume was developed over the past 10 years by The Ecological Initiative, the EWG and the Missouri Resource Assessment Partnership (MoRAP).

In addition to helping protect the environment, the inventory can help developers more expediently navigate complex permitting and approval processes.

While the inventory covers the entire St. Louis area, EWG staff believe it will find great use in Metro East, home to some of the region’s most flood-prone areas, most historically significant sites, and most important habitats.

It could even help curb the longstanding bane of Metro-East development, subsidence, by helping to reduce the runoff that commonly destabilizes abandoned coal mines.

While initially developed to facilitate planning for large-scale transportation infrastructure projects, the volume is also designed to make it easier to incorporate environmental considerations into local zoning and building codes, they say.

Information in the inventory has already proven valuable in planning for some local projects, including the Great Street program in Collinsville.

The  Ecological Data Inventory features the latest satellite photography of land cover across the region – showing everything from water impermeable buildings, streets and parking lots, to grasslands, woodland and crop land.

However, the most usable feature for planners and developers may be a new ecological significance rating, developed by the EWG and MoRAP, on the basis of that data and input from a variety of state, federal and private sources. 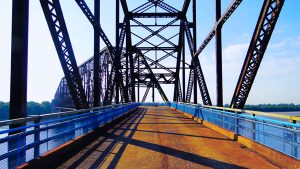 The historic Route 66 bridge over Chain of Rocks near Granite City. That area is considered environmentally significant for the region. (Photo courtesy of Illinoisroute66.org)

Among the most ecologically significant sections of Metro East are the Chain of Rocks area of Granite City, Horseshoe Lake, Silver Creek and its immediately surrounding watershed in Madison and St. Clair counties, and the area along the Kaskaskia River in St. Clair and Monroe counties.

The report highlights the areas of highest environmental significance that will be “under development pressure” through 2015.

A swath of wetlands from Fairmont City to Madison represents the largest such area in Metro East. Smaller sections of environmentally significant land are likely to be targeted for development in Alhambra, Mascoutah, and New Athens, according to the report.

Another unique feature of the report is its one-stop listing of grounds protected from development by federal, state, or local government or by private conservation groups. Many are protected under programs of which developers and even local planning officials may not be aware.

For example, the report lists conservation opportunity areas (COAS), designated under the Illinois Wildlife Action Plan as important to the state’s Species in Greatest Need of Conservation (SGNV).

State-designated COAS in the Metro East area include the Middle Mississippi River bottomlands in Monroe, Madison, and St. Clair counties; the Hill Prairie Corridor in Monroe County, the Lower Kaskaskia Bottom Lands in Monroe, St. Clair and Clinton counties, and the Pierre Marquette COA in Jersey and Madison County.

Some areas of Madison and St. Clair counties, mostly along rivers, are home to as many as five endangered species, according to the report.

Parcels in a wide section of central Monroe County are habitat for up to 10 endangered species; with one tract home to 15.

Ecoregions, also listed in the report, are another concept with which developers may unfamiliar.  They denote areas which are generally similarity in their ecosystems and in the type, quality, and quantity of environmental resources.

They are designed by the Illinois Endangered Species Protection Board to serve as a spatial framework for the research, assessment, management, and monitoring of ecosystems and ecosystem components.

However, with flood potential now a major concern across much of Metro East, many users of the report will likely be drawn immediately to the section on watersheds and waterways.

In addition to the boundaries of the three major watersheds in Metro East – the Mississippi, Missouri River, and Kaskaskia —  the report maps out the major impaired and free-flowing waterways in the area.

Impaired or partially blocked waterways present potential for localized flooding and other problems, the report notes.

While Silver Creek and the Kaskaskia River flow unobstructed,  the Mississippi and numerous tributaries to those waterways are obstructed and therefore at greater risk for flooding, according to the report.

Substantial areas along the numerous named and unnamed waterways in Metro East are in 100-year flood plain – meaning a one percent annual risk for severe flooding according to the report.

As the result of recent levee improvements, the Federal Emergency Management Agency is expected to soon reduce the total acreage at risk for 100-year flooding in American Bottoms area of Madison, Monroe and St. Clair counties, the report notes.

However, to the east, substantial parts of Clinton County will remain at risk for major flooding, the report shows.

The Kaskaskia River in St. Clair and Monroe counties is one of the most ecologically significant sections of Metro East. (Photo courtesy of Sierra Club)

While the Mississippi River, to no one’s surprise, is associated with the largest swath of wetlands in Metro East, the vast wetlands around Silver Creek are almost as wide at some points.

Moreover, they are the area’s most environmentally significant – ranking 18 on an 18-point scale, according to the report.

Using data in the compendium, the Belleville-based HeartLands Conservancy has also produced watershed plans for the upper and lower segments of the creek; with recommended steps to improve water quality, address flooding, and manage stormwater .