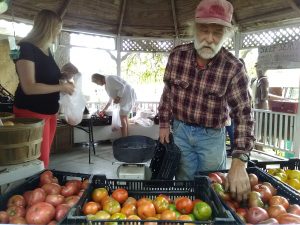 A wooden gazebo, nestled next to an old farmhouse at 3016 Route 173 in Richmond, holds produce freshly picked from the fields that surround them. As drivers pass by, their attention is immediately drawn to those fields with its horses, cattle, a moose, statues of Buddha, and the occasional dinosaur. A closer inspection reveals that they are metal sculptures, just part of the inventory for “Ginger Blossom Ethnic Rugs, Folk Art, and Furniture,” which operates daily.

Gary Gauger, and his sister, Ginger Blossom, have kept their grandparents’ family farm going through the decades by diversifying. Ginger, a former corporate buyer, continues to travel the world bringing authentic and exotic items made in other countries like Nepal to the site. Gary farms the old homestead raising heirloom produce and fruits using wholly organic methods.

“It’s all organic, and we farm about 30 acres of the property,” said Gauger. “We keep about half of it in cover crops for weed management and soil fertility, and the other half, we do in vegetables and leaf crops. It’s all from heirloom seeds meaning they’re not hybrids but old-time varieties handed down through generations of farmers and gardeners. We grow our fruits and produce from seeds that are collected here.

“We’ve also made our own varieties of tomatoes right here through cultivation and open-pollinating.”

From the highway, the big drawing cards are the visions of the farm, in addition to the outbuildings and barns filled with diverse items made by the artists themselves. According to the website: “The core inventory features primarily home furnishings and accent pieces, and ethnic and tribal collectibles including rustic pine furniture, furniture made from architectural salvage, and antique Swati and Tibetan trunks.

The farmhouse also has a history as one of the original McHenry County homesteads, with a second life besides farming. “The Hodges family originally settled this property in 1836, according to the county plat maps, where they had a dairy and orchard business going,” Gauger said. “They must have fallen on hard times in the 1920s, because they turned it into a speakeasy.

“Nearby Fox Lake, Twin Lakes, and Lake Geneva were popular spots for illegal drinking, at that time, and this site was pretty remote. My grandparents purchased this farm parcel from the Hodges, and they had a dairy operation for years,” he said.

The Natural Orgonik Farm Stand is popular with visitors because of the many items, all organically grown without pesticides and growth enhancers. Many varieties of the produce are historic in themselves, and known only to seed exchange clubs.

“The Chantenay Red Core carrot is an heirloom variety, and it was developed after the Civil War, by canneries, when canning food became popular,” said Gauger. “They wanted a variety that farmers could grow all across the country, regardless of the different types of soil like hard clay … we keep growing it because it’s one of the few carrot root plants that is sweet, and everyone likes it. Plus, the shapes it has coming out of the soil are fun for kids to look at.”

Different activities are always taking place. The orchard area plays host to yoga classes at 10:15 a.m. Sundays, with a $10 class fee, taught by a certified-RYT 200 instructor, who learned Himalayan Yoga and Meditation Centre under the direction of Anita Maher. “Suzanne” is a member of Yoga Alliance, and when she isn’t practicing yoga, she is teaching middle school English Language Arts.

Gauger enjoys the eclectic rural life, and can still picture himself at an early age on the farm. “I was about 6 years old, and my grandfather had already retired from dairy farming. He let my brother, and me, put a little wooden box at the end of the driveway, along the busy road, to sell sweet corn. He’d let us keep the money, and we thought that was pretty good. But that’s how I got started in selling produce. That was around 1960.”

The organic produce is also sold at the Farmer’s Market at the Depot in downtown Crystal Lake, from 8 a.m.-1 p.m. Saturdays, and at the Grayslake Farmer’s Market, from 3-7 p.m. on Wednesdays. The last day for the Natural Orgonik Food Stand’s season this year is Nov. 19.