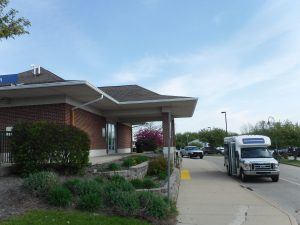 For the most part, various transit systems tend to stick to certain areas.

But because the Chicagoland region is close to both Indiana and Wisconsin, some services overlap. NICTD’s South Shore Line is the most notable example, as it connects Indiana to Chicago. Metra’s Union Pacific North goes into Kenosha, Wisconsin, Pace has two routes that stop near downtown Hammond, Indiana, and Western Kenosha County Transit has limited serve into Antioch, Illinois. And while much of the service involves taking commuters from other states to Chicago, Illinois residents benefit from connections to the neighboring states as well.

All of the current transit systems in the region trace their roots to private transit companies. They created routes based on perceived demand, even if that demand took them across state lines. But as public transit agencies started to take over, service areas became more important. Those agencies get their funding from the jurisdictions that served them, so there is less incentive for them to serve areas that don’t bring anything in for their funding.

For the services that do operate between states, the funding situation varies.

According to Metra spokesman Michael Gillis, when RTA was formed, what was then known as Chicago & North Western Railroad’s North Line had already been providing service to Kenosha for decades. While the RTA wound up buying some lines outright, C&NW lines was one of the cases where Metra paid the railroad to continue providing service. When the original contract was negotiated, Metra determined that, even if Kenosha doesn’t bring Metra any revenue, keeping the service going made logistical sense.

“It was determined that it was more cost-efficient to use their yard in Kenosha instead of building a new multimillion-dollar yard in Illinois,” he said. “A new yard would be needed because there is no room in existing Illinois yards.”

The arrangement continued after Union Pacific Railroad bought C&NW in 1995. Gillis said that Metra pays the fee that covers service on all three Union Pacific lines, and it doesn’t count the cost of providing service to Kenosha separately. Gillis does note that the City of Kenosha owns the train station itself, and it covers the upkeep out of its own funds.

Under the current schedule, most Union Pacific North Line trains don’t go as far as Kenosha, stopping at Waukegan. Aside from Kenosha itself, the Kenosha-bound trains serve two Illinois municipalities north of Waukegan — the city of Zion and the village of Winthrop Harbor. Nine trains travel each way between Chicago and Kenosha on weekdays, five trains make the trip on Saturdays and three trains make the trip on Sundays.

According to Spring 2014 station-by-station Union Pacific North Line ridership statistics — the most recent numbers available — most weekday passengers take the trains from Kenosha to Chicago and other points in Illinois. But some Illinois resident take advantage of the connection as well. 47 passengers got off at Kenosha during the morning rush hour. 69 passengers got off at Kenosha during off-peak hours. In both cases, the boarding numbers at the stations between Waukegan and Kenosha suggest that most of them boarded in either Chicago or suburbs further south.

About 60 passengers boarded the Chicago-bound afternoon rush hour trains at Kenosha. The fact that the number of people that got off the train before Waukegan was in single digits suggests that most of them went further south.

Meanwhile, Pace has two routes — 350 and 364 — that serve south suburbs and have an eastern endpoint in downtown Hammond, Ind. According to agency spokesperson Maggie Daly-Skogsbakken, this also had to do with logistics. Until July 2012, the city’s Dan Rabin Transit Center acted as a transit hub for Hammond Transit System and its successor, EasyGo Lake Transit, as well as Gary Public Transportation Corporation’s Route 12. Pace buses could use the transit center to turn around and provide convenient transit connections to other transit systems.

After the shutdown of EasyGo Lake Transit forced Ran Rabin Transit Center to close as well, Pace was able to figure out an alternative.

“Pace maintained connections with Gary Public Transit Corp service by continuing this limited routing into Indiana,” Daly-Skogsbakken said. “The location we’re currently at, at Morton [Court] and Willow [Court] in Hammond provides Pace with a safe layover location for the buses as well as a turnaround and is only 0.2 miles from the state line.”

In Illinois, South Shore Line makes a stop in Chicago’s Hegewisch neighborhood, as well as at Metra Electric Line’s 56th-57th-58th Street, 11th Street/Museum Campus and Van Buren stations. To avoid competition with Metra, eastbound South Shore Line trains heading to Indiana don’t let passengers get off at any station between Millennium Station and Hegewisch, while westbound trains heading to Chicago don’t let any passengers get on after Hegewisch.

According to NICTD spokesperson John Parsons, his employer pays Metra for access to the tracks, while Metra pays it to stop at Hegewisch. As of 2016, NICTD paid $ 7.4 million, while Metra paid $3.7 millon.

Parsons said that the majority of the passengers take the South Shore Line to Chicago from destinations further east, especially during weekdays, and the line’s rush hour schedules are designed with that in mind. A significant number of passengers does use the line to get from Hegewisch to downtown Chicago.

“In terms of boardings, it’s 17 percent [of all boarding on the line],” Parsons said. “It’s just under 1,000 passengers a day. It’s roughly third highest ridership [station] on the line. The highest is East Chicago, followed by Hammond and Hegewisch.”

He did note that NICTD has found “a lot” of cars with Illinois plates at Hammond and East Chicago stations. Parsons speculated it had to do with parking costs. Hegewisch station parking lot is operated by Metra, which charges for parking, while NICTD doesn’t.

Parsons said he didn’t have the exact numbers for how many riders boarded in Illinois. The RTA has occasionally done its own station-by-station ridership studies, and the numbers from the most recent, 2006 study suggest that some Illinois riders do use the South Shore Line trains to commute to Indiana. At the time, 57 passengers boarded morning rush-hour trains at Millennium Station, a total of 19 passengers boarded in other stations in downtown and in Hyde Park, and nine passengers boarded at Hegewisch. The fact that 10 passengers got off at Hegewisch during the same period suggests that most of them went further east.

The study also indicates a significant used off-peak trains to get from Chicago to Indiana during non-rush hour periods. 610 passengers boarded the trains at Millennium Station during the mid-day period, and 557 passengers boarded the train during evening hours. By comparison, during evening rush hours, when most Indiana commuters would be returning home, 3,871 riders boarded at Millennium Station. Other Chicago stations also showed that more people board the train there during midday and evening hours than during morning rush hours.

Indiana riders also benefit from ChicaGo Dash, a rush-hour express bus service running between Valparaiso, Ind. and downtown Chicago. The service has been operated by Valparaiso for the past nine years. Because of the way its schedule is set up, Chicago residents can only use it to travel to Valparaiso in evenings. There is a less direct way to reach the city — on Friday-Sunday, V-Line, the city’s public transit system, operates the Orange Route, which links together Valparaiso University and South Shore Line’s Dune Park station.

And, until recently, those weren’t the only cross-state public transit services. Until the end of 2009, Hammond Transit System’s Route 1 linked together Whiting, Hammond and Chicago’s East Side neighborhood. In Jan. 1, 2010, the Northwest Indiana Regional Bus Authority took over service, expanding the system into EasyGo Lake Transit. As part of the changes, it created two major corridor routes, both of which started on the East Side. The Green Route primarily used Calumet Avenue, traveling as far south of Dyer, while the Green Route, which primarily used Indianapolis Boulevard, went as far south as Highland. While EasyGo was envisioned as a start of a regional bus system similar to Pace, funding issues forced it to shut down in July 2012.

Since then, the Gary Public Transportation Corporation, which already served downtown Hammond with Route 12 — Tri-City Connection, has tried to fill some service gaps left by EasyGo’s demise. Route 24-Lakeshore South serves the section of Hammond south of Michigan Street. While GPTC has floated the possibility of creating a Lakeshore North route to fill in the gaps further north, the plans haven’t come to fruition, leaving the East Side without any Indiana connections.

On the Wisconsin side, when Western Kenosha County Transit launched in 2007, it established the first connection between Antioch and several Wisconsin town via Route 2 and its commuter express service . Since then, there have been several service changes. The connection is currently provided by two routes. The weekday Antioch Service route runs Monday-Friday, making three trips from Paddock Lake, Silver Lakes and Twin Lakes to Antioch Metra station before looping back to Wisconsin, There is also a special route that runs on Tuesdays and Thursdays between Paddock Lake’s Village Plaza and Antioch’s Wal-Mart location. WKCT also operates door-to-door service to Antioch Metra station and the city’s shopping strips. Unlike the regular routes, passengers must reserve a spot one day ahead of time, and buses pick them up at their homes.

The Antioch Service route is geared toward serving commuters working in Chicago. The morning bus is timed to prop off passengers in time to catch the 6:35 a.m. Chicago-bound North Central Service Line train, while the afternoon buses arrive in time to meet 4:35 p.m. and 6:36 p.m. trains arriving from Chicago in Antioch.

Attempts to reach the transit agency for comments before deadline were unsuccessful.