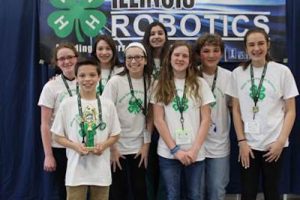 Eleven 4-H teams from DuPage, Kane and Kendall counties took home awards from the annual Illinois 4-H Robotics Competition on April 21 at the University of Illinois. The local 4-H members dominated the event, with three teams being named “top dogs” at their level of competition.

More than 60 teams of middle-school students from across the state participated in this year’s state 4-H ‘DogBot Challenge,’ which combined robotics design and programming with a canine theme.

“The 2016 DogBot challenge required each 4-H team to design a robot and program it to perform agility and obedience tasks similar to that of a trained dog,” said Donna Nuger, 4-H Youth Development Educator with University of Illinois Extension. “Robots completed various obstacles, barked and did tricks. Each successfully completed task earned points in the table event portion of the showcase.”

Kendall County 4-H team “#Awesome” came out as the top dog in the Rookie Category, winning both the Champion title and top table performance. The team includes William Davis and Josh Greven of Newark; Adam, Audrey and Elijah Hartford of Yorkville; and Kole Hultgren of Plano, and is coached by Anna Hartford.

Complete state results are as follows (tri-county teams in bold): 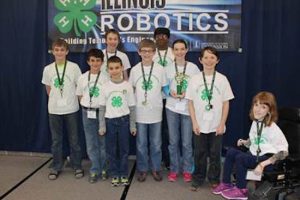 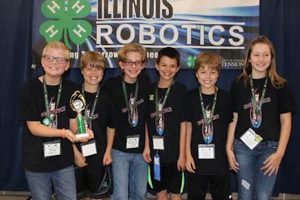 “Our local 4-H Robotics program is growing and our 4-H members and volunteers learn and grow with it,” said Nuger of the teams representing DuPage, Kane and Kendall counties. “Every team worked hard and learned from their experiences and from each other. These kids also develop critical life skills, like teamwork, organization, communication, and problem solving. Plus, it’s a fun experience, and youth meet peers from around the state.”