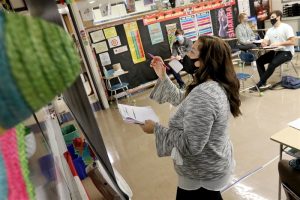 Dual Credit Spanish teacher Lana Bachta looks up at her projection screen as she teaches a hybrid classroom with some students attending in-person and some over video conference during the first day back at school since October for hybrid learning, at Cary-Grove High School on Tuesday, Jan. 19 in Cary. (Shaw Media Local News Network photo)

SPRINGFIELD — Like the rest of the state, schools in northwest Illinois are facing an educator shortage which has been exacerbated by the COVID-19 pandemic, according to a new survey.

The 2020 Illinois Educator Shortage Study, released March 1 by the Illinois Association of Regional Superintendents of Schools, indicates a majority of school districts that responded to its survey believe the problem is getting worse.

“Locally, our school data is very similar to what was found statewide in the IARSS survey. Districts reported that the teacher shortage is getting worse,” said Chris Dvorak, superintendent of the La Salle, Marshall, and Putnam County Regional Office of Education.

“Our latest IARSS survey finds that Illinois continues to struggle with a teacher shortage. The shortage has been made worse by the COVID-19 pandemic,” Dvorak said.

Each of the 853 school districts in the Illinois public school system has its own superintendent. In total, 591 responded to the survey.

The 54 regional superintendents of the IARSS, who act as intermediary between the Illinois State Board of Education and local school districts, developed and conducted the survey using Goshen Education Consulting.

More than half of the state’s school districts said the location of their schools negatively impacted their ability to recruit new teachers, the most common reason cited in the survey. Many superintendents attributed a reluctance among prospective teachers from other areas to move to the rural parts of the state for work.

The northwest region, which includes counties from Jo Daviess to La Salle to Rock Island, reported the third highest levels of shortages out of the survey’s seven regions. About 81 percent of school districts in the region responded to the 2020 survey, and 72 percent of those districts reported a problem with the number of available teachers.

“It is a very real problem, and one that I do not foresee getting any better in the near future,” said Steven Wrobleski, superintendent of La Salle-Peru Township High School. “There are significant shortages of teachers in math, science and special education.”

“I worry for the small towns and rural communities that really make up the vast geography of Illinois, Wrobleski added. “There are too many districts with unfilled positions and folks teaching that do not have the proper qualifications.”

Nick Reineck, assistant superintendent for human resources and educational programs for the Sycamore school district in DeKalb County, said the area was already facing a teacher shortage before COVID-19. Some districts have now had to adjust resources and staffing levels to meet the needs of students.

“We already had openings we had struggled to fill before the pandemic hit,” Reineck said. “We’ve been able to make things work. Everybody’s stepping up and helping out where they can in each building.”

Of the 97 responding school districts in the region, 12 had to cancel a class or a program due to not having a qualified teacher to manage it within the past year, and 13 had to move a class online for the same reason. In total, 34 classes were canceled and 46 were moved online.

The region has also reported a struggle to maintain a pool of substitute teachers to manage classes during an instructor’s sick or off days.

Brent O’Daniell, superintendent for the Genoa-Kingston district in DeKalb County, said the number of applications the district is receiving for full-time teaching positions is reflective of a continuing downward trend.

“They’ve been cut in half to two-thirds of what they’ve been 10 years ago,” O’Daniell said.

With four of five of its responding districts calling it a serious problem, DeKalb County reported the most difficulty in substitute staffing out of all counties in the northwest region.

Stephenson County reported the most severe shortage of full-time teachers, with all of its responding districts calling it a serious problem.

Regional superintendents attributed the substitute shortage to a number of factors, primarily concerns among teachers over COVID-19.

“COVID-19 has had the greatest impact on our substitute teacher shortage,” Wrobleski said. “Since our sub pool tends to be an older crowd, COVID-19 has kept many subs out of the schools for fear of catching the virus.”

Every school district in the northwest region that responded to the survey anticipates some level of problems with substitute shortages in 2022 and 2023.

“I do worry as we start bringing more students back to school, whether we will see a return of our former subs that have taken a hiatus,” Wrobleski added.

To deal with the current lack of qualified teachers, hybrid and remote learning will be pursued to grant students more access even when a teacher is not available, along with a credit recovery system for students that miss out on integral classes as a result of COVID-19 and teacher shortages.

Dvorak said that moving forward, the organization will propose resources and ways for teachers to adapt to the “new normal” of teaching, push for new standards, establish teacher training pipelines, and explore ways to share the burden of teaching and support substitutes across school districts.

O’Daniell said that policy changes will be a key to keeping qualified teachers working in the state and to attract new teachers to join the field in the future.

“It’s a challenge right now on top of a pandemic,” O’Daniell said. “We have to find a way to make teaching a profession that people want to get involved in.”