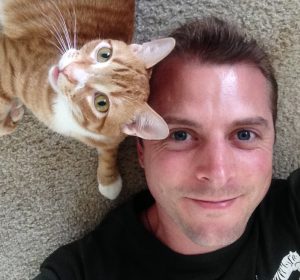 Christoher Poole runs a successful YouTube channel, Cole and Marmalade, where he shares the humorous antics of his two domestic cats and educates viewers with large and small cat facts. (Photo courtesy of Christopher Poole)

Christopher Poole is truly a cat lover. Any size cat.

The Cary resident helped rescue 39 cats and kittens from an abandoned Barrington home in July, set up a fundraiser to house and care for the cats, and partnered with local animal welfare volunteers to arrange for adoptions.

Shortly after, he set off for Africa to volunteer at Big Cat Sanctuary to rescue and care for lions and other big cats. At the same time, Poole runs a successful YouTube channel, Cole and Marmalade, where he shares the humorous antics of his two domestic cats and educates viewers with large and small cat facts.

How did Poole start solving and preventing cat-astrophies? He says that although he went to school for graphic design, he’s always liked animals. In 2006, he began volunteering at a rescue facility.

“I wanted to do something that involved helping, rather than sitting at a desk, designing,” he said.

In 2008, he traveled from his home in Nottingham, England to work at Big Cat Sanctuary in Florida, where he cared for the rescued animals. Poole met his wife, Jessica, at Cat Sanctuary. Although they connected online, he figured if they met there, “even if she didn’t like him, she’d get a behind-the-scenes tour of a really cool place.” Jessica, a McHenry County native, and her family, brought Poole to McHenry County.

Poole soon became involved in Big Cat Rescue. There he helped rescue lions, tiger, panthers, and other big cats that were pets.

“Ten [thousand] to 20,000 big cats are privately owned,” said Poole. “This can cause an animal-welfare problem and human safety issues.”

He went on to explain that many people get big cats as babies, and no longer want them when they become adults, “because they are essentially wild animals, with wild animal instincts.” While working for Big Cat Rescue, he met Cole, a black cat.

“Because of superstition, black cats are the least likely to be adopted and the most euthanized domestica cats,” he said.

Poole’s interest in cats turned into a career. He parlayed his knowledge of graphic design and his experience video recording at Big Cat Sanctuary into his initiative “Little Cats helping Big Cats. 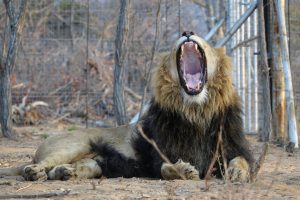 Poole’s interest in cats turned into a career. He parlayed his knowledge of graphic design and his experience video recording at Big Cat Sanctuary into his initiative “Little Cats helping Big Cats. (Photo courtesy of Christopher Poole)

“I use Cole and Marmalade to educate people on the plight of the big cats,” Poole said. “My trip to Africa gave me a chance to show people how the Big Cat Sanctuary feeds and cares for the rescued cats and how the area is landscaped to create an environment for the cats.

Through sponsorships, merchandise, and advertising, Poole can consider his cat love a career path.

“It’s not a lot of money,” he said. “But it gives me a lots of satisfaction. People with PTSD, depression, undergoing chemotherapy, etc. comment that the videos are the bright spot of their day.”

At the same time, Poole is making a difference for cats large and small.

Thanks to $10,000 in donations the 39 cats rescued from the Barrington homes were medically treated, housed, and eventually adopted. Each of the cats were given “royalty” names like Pippa, Diana, Elizabeth, Camilla, Charles, and Kate. A video update at https://www.youtube.com/watch?v=D95pEofXvbU shows how these cats were cared for by volunteers Diane and Deb, also from Cary.

To find out more about Poole’s rescue efforts visit his web site  and you can view Poole’s YouTube channel.