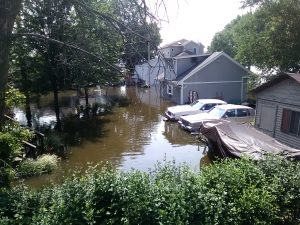 La Fox River Drive, an area of historic homes near the Algonquin River Bridge, was one of the municpality’s many residential streets lined with sandbags and makeshift dams in July 2017. (Photo by Gregory Harutunian/for Chronicle Media)

Last year, at this time, residents and business owners along the Chain O’ Lakes and Fox River in Wisconsin and Illinois were preparing for another boating and recreational season with all the good things that resort-area living can offer.

Then, the July rains hit. Fast and close together, the rainfall levels engulfing the waterways to several inches above the 7.67-foot record flood stage recorded during the “100-Year Flood” of 2013.

This year, the National Weather Service issued a flood watch from May 25 until 1 p.m. June 4, for the Fox River and its lower reaches in McHenry County, due to the remnants of the subtropical storm Alberto winding northward before dissipating. The order translated into a “No Wake” designation for the Chain-Fox river systems.

“As of June 1, we have received updates and notices from the Illinois Department of Natural Resources, as well as the NWS, showing that the order has been rescinded,” said Joe Keller, the Fox Waterway Agency’s executive director. “The difficult thing with these weather-forecasting models is predicting rainfall while anticipating the movement of the various weather systems of the last decade … and it’s not confined to local-orientation but a phenomenon worldwide.

“The quick fluctuations that occur are what really make it difficult to forecast,” he said. “We’re very watchful, and people point to the record levels in 2013 and 2017, known as the ‘100-Year Flood’ with the inundation and destruction they both brought to our area. We’re also hopeful that the levels recorded toward the end of May at the New Munster, Wis. gauge station do not reach those flood stages.”

The NWS advisory announced for the Fox River and McHenry County area was predicated on expected increases in water levels from the excess subtropical stormwaters. The United States Geologic Surveys showed minor floodstage graph elevations at the Nippersink Creek in Spring Grove of 4.55-5.18 feet in height, for the period of May 28 to June 2. Further south, the Fox River at Algonquin showed an average 2-foot level, despite a sharp dip and rise during the same time period.

The Village of Algonquin suffered significant damage during the 2017 flood with the river cresting at a record level of 13.65 feet above flood stage in July, and later that month, it was still at 13.01 feet. Nearly 40,000 sandbags were distributed, according to village officials. In 2013, the rain event had set a record of 12.7 feet above flood stage. A section of Fox Lake’s Eagle Point Road, near Pistakee Lake, as floodwaters began to encroach the roadbed on July 14, 2017. (Photo by Gregory Harutunian/for Chronicle Media) 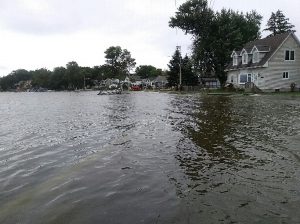 A public health notice was also issued by the McHenry County Health Department, which revealed that testing of mosquitoes in the Lake In The Hills, the municipality adjacent to Algonquin, detected the presence of the West Nile Virus. Two crops of mosquitoes were hatched, and the subsequent flood-period batches potentially carried the virus.  The record floodwater levels stayed throughout July, before following the normal flow pattern and emptying into the Illinois River basin.

“The systems had been ‘No Wake’ but the Chain, along with the upper and lower Fox River zones are open,” said Keller. “IDNR monitors the system very closely, and makes the determinations based on canvass and gauge data, and does it very well. Again, it comes back to these predictor models which use historical data in their research studies. Because of the present-day fluctuations in the weather systems … it’s a tough proposition.

“For now, we’re looking forward to a great summer and boating season that we hope to enjoy without the drama of last year.”