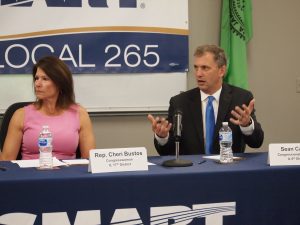 The state being billions of dollars behind on infrastructure maintenance is putting Illinois residents at risk, according to an expert in the transportation industry.

Steve Schlickman, former executive director of the Regional Transportation Authority, said at an Aug. 28 roundtable discussion in Carol Stream about transit issues that there is an $19 billion backlog of maintenance project for RTA agencies alone.

“Metra’s fleet of engines, half of them are beyond their useful life,” Schlickman said at the roundtable talk led by Sean Casten, Democratic candidate for the 6th District congressional seat. “It is the oldest fleet in the country.”

He said capital improvements in the state have waned because state officials don’t keep a laundry list and funding source for needed projects anymore the way Gov. Jim Thompson did when he led the state.

He said one way to generate more money for infrastructure and transportation improvements is to increase the federal gas tax. 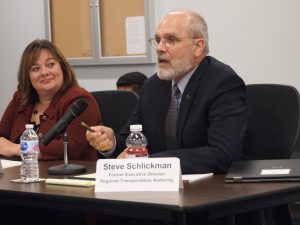 Casten agrees with the idea. He said his opponent, U.S. Rep. Peter Roskam (R-Wheaton), has gone after him about supporting a hike in the gas tax, but it is something that is needed.

Casten said, for him, it is not a question of taxes, but return on investment. He likened the proposed gas-tax increase to a municipality borrowing money at 3 percent interest and getting 7 percent interest when it invests that money.

He said raising the federal gas tax would keep the playing field equal for everyone as every state would be involved. Casten said the move would pour money into state coffers to repair roads and do transit projects sooner rather than paying more for the same projects later.

“If it generates a return on investment, I would do it all day long,” Casten said of finding money for infrastructure projects.

“Where is it?” the third-term congresswoman asked. 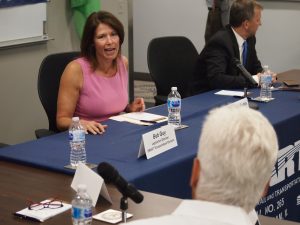 She said that further federal investment in Illinois needs a bipartisan push for creating jobs.

“President Trump promised a $1 trillion infrastructure package to grow our economy and create more good-paying jobs, but Washington Republicans failed to deliver,” Bustos said. “Hardworking families of the 6th District need a leader like Sean Casten who will fight hard and get real results for Illinois. If we’re serious about raising wages, creating new economic development opportunities and building a 21st century infrastructure, we need Sean’s voice in Congress.

Casten said investing in infrastructure will benefit the 6th District and the region as a whole.

“The more we invest in our transportation infrastructure in the 6th District, the more jobs we will create here at home, as well as access to work in nearby Chicago,” Casten said. “Our district is home to four Metra rail lines with 22 stations, 62 Pace bus routes and three major highways and tollways. That infrastructure contributes to our economic growth and global competitiveness, job creation and environmental sustainability. We need to build on that. Donald Trump has called for investing in our infrastructure, but so far he’s done nothing — and Peter Roskam has failed to hold him to his commitments.”

Earlier this year, Illinois’ infrastructure received a ‘C-minus’ rating from the American Society of Civil Engineers.

McHenry County Board Chairman Jack Franks and other roundtable members said that Congress needs to direct federal investment to areas with demonstrated need, strengthen programs that support public transportation, and maintain and expand policies that support America’s manufacturers and workers, including Buy American, Davis-Bacon prevailing wage requirements and the use of project labor agreements.