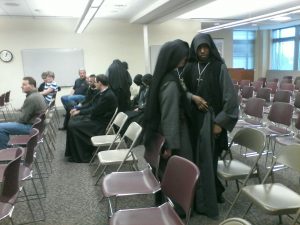 Sisters of the Fraternite of Notre Dame Order arrive for a 2015 county zoning board of appeals meeting. (Photo by Gregory Harutunian/for Chronicle Media)

The McHenry County Board set aside discussions on a settlement to resolve civil litigation brought against it by the Fraternite of Notre Dame Order, during its March 19 regular session. The matter had been listed as an agenda item, possibly signaling a thaw in the dispute through a negotiated accord, but was ultimately tabled until an April meeting.

The board had voted to deny a request by the Order for a special-use permit at their rural Marengo county property during its Sept. 15, 2015 session by a 21-2 vote, subsequently prompting the suit’s initiation on constitutional grounds and overt denial of religious freedoms.

At issue is the Order’s request for a permit to build and occupy a boarding school for boys and girls, an assisted living facility for the elderly with hospice care, a bakery, a brewery, a winery with sampling room, a larger gift shop, and dormitory for student and staff housing at their site on 10002 Harmony Hill Road.

“As I understand it, the matter was tabled for future discussions,” said James C. Geoly, the litigant attorney, representing the order. “We are involved in productive settlement talks and working very hard on getting this settlement accomplished. The delay is no one’s fault. It’s just taking a little bit longer.”

The petition process also endured a series of contentious hearings at the McHenry County Zoning Board of Appeals level in 2015, and received a 4-3 neutral vote indicating no clear recommendation for the county board. Testimony and comment at the ZBA hearings included the Order’s representatives, a cadre of nearby residents from the Harmony Hills Estates subdivision, and Coral township officials. A counter-petition, with more than 800 signatures, contended the Order’s proposal essentially constituted a commercial enterprise in a rural area.

The permit sought approval for the expansion on an additional 30 acres of property, and was viewed as augmenting a previous special-use permit that was granted in 2005. Particulars of the Order’s lawsuit noted that several businesses, including a golf course serving alcohol operate nearby the property and obtained code licensure.

The filing of the special-use permit petition came in September 2014, one month before a newly adopted county Unified Development Ordinance was effectuated. The Order, housed on 95 acres, received its prior 2005 approval to encompass a place of worship with a monastery and church, a seminary, a convent, a retreat center, a bakery, a printing press, and a cemetery.

Current points of conflict included the school for kindergarten through 12 grade, and the nursing facility for the elderly, with hospice care.

The Order has its roots in France and was inaugurated in 1977, by Bishop Jean Marie Kozik, on a vision of the Virgin Mary and a commission to aid the underprivileged and needy of the world. They had established themselves in the Chicago neighborhood of Austin, before acquiring the McHenry County parcel.

“There are certain procedural issues to bear out on the right way to go, with this,” said Geoly. “The Sisters have asked to build certain structures and both sides have compromised on the issues. Hopefully, the settlement will be accomplished soon.”