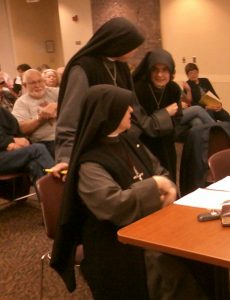 It resulted from the McHenry County Board denying special-use permits for their operations expansion at its rural Marengo site, and paves the way for the construction of new amenities.

The court concurred that the County Board “violated the equal terms and substantial burden provisions of the Religious Land Use and Institutionalized Persons Act, and violated the Illinois Religious Freedom Restoration Act.” The Order owns approximately 95 acres of property, located at 10002 Harmony Hills Road.

“The court entered the consent decree finalizing the settlement,” said James C. Geoly, who represented the Order, in the Northern District of Illinois Court. “We now have a court-approved settlement that grants the Fraternite the zoning they need to proceed with their projects.”

The Order had received a conditional-use permit in 2005 for housing, a chapel, and other structures. In 2014, the Order sought an amendment to the earlier permit to include an additional 30 acres of property to allow for the building of a barn-like structure for winemaking, beer brewing, and a commercial kitchen, the building and operation of a boarding school, a nursing home with hospice services, and a gift shop. They subsequently petitioned to request height variations for the school and nursing home.

The acrimony of residents seeking to deny the conditional-use permit helped fuel the contentious hearings at the McHenry County Zoning Board of Appeals level in 2015. The 11-person board voted to make no recommendation, and forwarded the petition to the County Board.

“I think the consent decree is a fair resolution of the issue,” said Charlie Eldredge, a ZBA member. “In my view, they proved their case at the Zoning Board of Appeals, which is why I voted in support of the amendment to their original permit. The ZBA is only a recommending body, and the actual decision is made at the County Board level.”

The McHenry County Board voted to deny the petition, and set in motion the civil litigation on Dec. 16, 2015. The Order, and its property, had been subjected to vandalism and harassment. In his decree, Johnston noted, “Nothing shows the full spectrum of a community like a properly noticed public hearing … the good, the bad, and the ugly. The public hearing in this case was no different. The historical religious bigotry (they have) been subjected to provides a painful backdrop to this case.

“Property … has been vandalized and desecrated in the most vile ways. Vehicles have been vandalized in ways that affected the operation of the vehicles, including the loosening of lug nuts and the severing of brake fluid lines.

Other examples such as a community member “staking out” the property to take photos and video, and a County Board member’s letter castigating the McHenry County State’s Attorney, saying, “The State’s Attorney is apparently Catholic, he abdicated his duties as State’s Attorney to support Catholic nuns,” were cited.

“This assertion speaks volumes as to the religious animus festering in this case. Second, based upon this court’s experience, the allegations against the State’s Attorney, and his staff, are not only unfair, they are untrue,” Johnston said, in his decree.

The Order further agreed to leave 60 percent of the property as undeveloped and open space. No time limit will apply to the conditional uses approved in the decree “with respect to any buildings (i.e., barn, gift shop, and/or boarding school) actually constructed.” The Order will submit any site plan review plans to the county, and will consolidate all the property under one personal identification number.

They also agreed “not (to) request permission to construct or operate a nursing home on the property for a period of three years from the (March 2) date.”