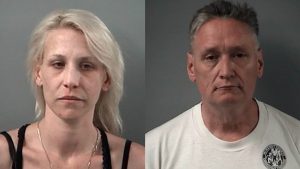 Andrew Freund Sr. and JoAnn Cunningham, the parents of Andrew “A.J.” Freund, appeared separately for an April 25 arraignment at the McHenry County Courthouse. Each were given bond amounts of $5 million, as some details of the murder were revealed at the hearing.

Andrew “A.J.” Freund was allegedly beaten to death, after being forced to take a cold shower.

The Lake County Coroner’s office in a press release April 25 confirmed that the cause of death was “craniocerebral trauma as a consequence of multiple blunt force injuries.”

Online condolences and memorials can be left on a tribute page, established by the funeral home (www.davenportfamily.com), where an obituary is also published.

A GoFundMe page was set up by Kim Clausen, who has known the family, at https://www.gofundme.com/f/d62g4d-rest-in-peace-aj. She said that all funds will go to A.J.’s brother, Parker, and grandmother to help with the burial with excess funds also being given to them for a fund for Parker.

The body of A.J. was found April 24 in a rural farm field near Dean Street and 176th Avenue, south of Woodstock.

The parents, Freund Sr. and Cunningham, were charged with numerous felony counts relating to his reported April 18 disappearance, death, and concealment. McHenry County Coroner’s Office personnel continue their investigation at the site, accessed only by a ComEd gravel service road.

A press conference, convened at 1:50 p.m. April 24 in the Crystal Lake City Hall, confirmed the evidence collected and that both parents were charged.

“It is with heavy heart, we believe to have located the body of Andrew Freund, this morning,” said Crystal Lake Police Chief Jim Black. “After interviewing both the father and mother with forensic evidence, they both gave information that led to the recovery of the body in a shallow grave, wrapped in plastic.

“The coroner’s office and the Federal Bureau of Investigation remain on site, collecting evidence to preserve the integrity of this investigation and the charges,” he said. “This is still an active and ongoing investigation.”

There is no official cause and manner of death.

The day began with a county sheriff’s office note to media outlets that a staging area had been set up at the Kishwaukee Headwaters Conservation Area, which is near the recovery site. The sequence of events went quickly, and reportedly began at 6 a.m., when Cunningham was again interviewed at the Crystal Lake police station in the presence of her attorney, George Kililis, and McHenry County State’s Attorney Patrick Kenneally.

Kililis left alone several hours later, telling reporters he had no comment, but they would get their information at the press conference. Both parents had been interviewed through the early morning hours and were confronted with forensic cell phone data. Information from both parents led authorities to the recovery site.

Meanwhile, at the Freund home, law enforcement personnel were seen carrying items from the scene, including a child’s mattress, a plastic bin, and a shovel caked with dried material believed similar to that of the farm field. The family’s dog was also taken to a shelter.

The boy was reported missing April 18 in a 911 call made by his father, Andrew Freund Sr., and was last seen in bed at around 9 p.m., the night before. Authorities indicated after their initial searches, they did not believe the boy was abducted since a K-9 team “picked up the scent” at the residence. Authorities concluded the boy could not have left “on foot,” and subsequent investigations were focused on the home itself. A makeshift memorial was erected on the front lawn, and residents held a candlelight vigil April 21 at the town’s North Beach.

Freund and Cunningham did appear at an April 23 shelter care hearing in the McHenry County Courthouse regarding their 3-year-old son, Parker, who has been in DCFS hands since Apr. 18, following A.J.’s disappearance. The hearing has been delayed until April 29, as court officers sought a suitable foster care provider. The initial provider was allegedly determined to have a conflict of interest.

Search teams combed the nearby 319-acre Lippold Park, along Route 176, and expanded the search area April 23 to include Veterans Acres Park, near the family home, and Stearns Woods Park. Both open spaces contain ponds and the Crystal Lake Police conducted grid searches at both sites, using marker buoys, with no results.

Due to numerous Freedom of Information Act requests, Crystal Lake police revealed their history with the family, which extended to 17 visits over the last five years. Documented in the 63 pages of report information were unacceptable living conditions, including the “overwhelming smell of feces” near A.J.’s bedroom window, premises disrepair, alleged drug use, broken windows in winter, and bruises on the hip of A.J.’s brother.

The Illinois Department of Child and Family Services had their most recent contact with the family in December 2018, when it dropped charges of neglect and abuse against both parents. Prior DCFS contacts with the family began in 2013, when A.J. was discovered to have been born with opiates in his system. At 1 month old, he was placed in foster care, as Cunningham faced allegations of neglect and abuse. He was returned to the parents at 18 months old in 2015 and Cunningham also re-entered a drug rehabilitation program.

Cunningham and Freund were living together at the time of the boy’s disappearance, although they were not romantically linked. Cunningham is also seven months pregnant.