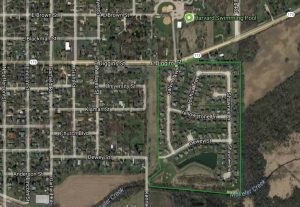 An aerial view of the Park Pointe neighborhood, and the Route 173-Dewey Road corridor where a 48-unit senior housing complex has been proposed.

The Harvard Planning and Zoning Commission voted to reject a parcel reclassification from single-family residential to multi-family residential, off Route 173 near Dewey Road, and effectively withheld its recommendation on a 48-unit senior housing project proposed by a local developer, during its Oct. 4 meeting.

Concerns over housing density near a neighborhood with single-family homes, and potential property devaluations, also contributed to the decision.

The matter now moves forward to a Harvard City Council meeting, slated for Oct. 24, with no recommendation from the zoning commission.

Residents from the adjacent Park Pointe subdivision packed the chambers to provide input and hear discussion, prior to the commission’s vote. The two-hour session aired a host of preliminary issues including traffic flow patterns, increased vehicle activity, and easement considerations where the development parcel lies less than 10 feet away from a Park Pointe residential property.

The Illinois Department of Transportation would also need to give approval for turn lanes from Route 173, a state thoroughfare, and necessitate a separate permitting process than municipal jurisdictions. The project site encompasses six acres of vacant land, a de facto open space abutment to the Park Pointe neighborhood.

Kelley Henson, whose position will come under the heading of manager for the complex, said at the meeting, that the units would rent from $700 per month to a client base of people 55 years of age and older. While the rental to individuals under Section 8 guidelines is not mandatory, the fixed income nature of senior citizens and their financial stability would be beneficial, she noted.

While the aspect of fixed- and low-income housing was mentioned, it made no impingement on the Illinois Affordable Housing Act where the developer ordinarily receives federal tax credits and offer them to investors. The funding then offsets the costs of construction and decreases the rental amount to tenants. According to the pertinent section of the Illinois Compiled Statutes, “The … program is hereby created for the purpose of developing and coordinating public and private resources targeted to meet the affordable housing needs of low-income and very low-income households in the State of Illinois.”

“Harvard is already in compliance with the Illinois Affordable Housing Act, said City Administrator David Nelson. “Most of the property values in Harvard are slightly depressed, from top to bottom. This is why we embarked on the creation of the Enterprise Zone with Woodstock, and portions of McHenry County.

“We have the Pedigree Ovens manufacturing plant, which expanded and is included in that perimeter, and there are several other industrial projects that are presently in discussion,” he said.  “We’re looking ahead to another expansion project, hopefully with permits to be issued shortly.”

The developers, Elvis and Carolyn Henson, have brought similar development projects for consideration in Harvard, which also met resistance from zoning commission officials stemming from housing density. They did previously construct a 21-unit senior housing campus on Northfield Court in 1998.

However, more than a decade ago, the commission rejected another proposed senior housing project, due to potentially declining property values for adjacent homes and traffic impact.

In the new offering, plans call for an altered layout, a meeting space, an on-site office, and a swimming pool. Concerning nearby recreational amenities, Park Pointe has its own open space for recreation covering approximately 6.7 acres, according to the Harvard website, with a playground, fishing pier, basketball court, and walking path.

“The city council will hear this proposal Oct. 24,” Nelson said.