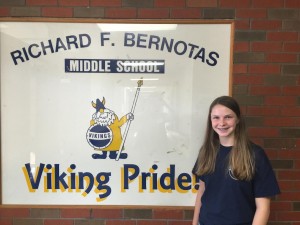 A book about Japanese Friendship Dolls, which Megan Lowe read in sixth grade, inspired her to write the story, which will appear in a leading print magazine for children, “Stone Soup.” (Photo by Adela Crandell Durkee/for Chronicle Media)

According to Lowe, Strebel asked them to “write for more than just yourself, more than for the teacher, but for a wider audience.”

She expected each student to submit stories for publication.

In January, “Stone Soup,” a leading print magazine written and illustrated by and for kids, will publish one of Lowe’s stories. Founded in 1973, “Stone Soup” is a subscription-based magazine geared to children ages 8-13. Published six times a year, the magazine receives more than 250 submissions a week and more than 10,000 a year.

The writing project began when Strebel assigned a research paper. A book about Japanese Friendship Dolls, which she read in sixth grade, inspired Lowe.

In 1927, the Committee on World Friendship Among Children decided that one Japanese doll ambassador would be located in each of the 48 states in existence at the time. California, New York, and Ohio received three dolls; Connecticut, Massachusetts, Missouri, Oregon, and Pennsylvania received two; and the District of Columbia received one.

Most of these states took an especially active part in sending American baby dolls to Japan. There is no record that New Mexico and Oklahoma ever received a Japanese Friendship Doll. 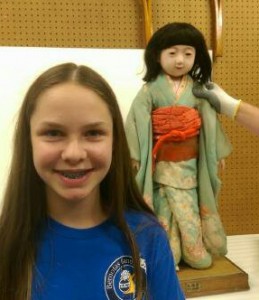 A book about Japanese Friendship Dolls, which Megan Lowe read in sixth grade, inspired her to write the story, which will appear in a leading print magazine for children, “Stone Soup.” (Photo by Adela Crandell Durkee/for Chronicle Media)

According to Lowe, because of anti-Japanese sentiment during WWII, several of the dolls were lost or destroyed. However, after 20 years of searching, 46 dolls have been located, with 38 dolls in public museums or other public institutions.

Lowe’s story, “Miss Kagawa’s Gift,” is about the life of a young Japanese orphan who is adopted by a U.S. family in 1927.

“The story is about this little girl who is trying to figure out how to adapt to her new life because everything is so new and it’s such a different place for her to be,” said Lowe.

Lowe got a chance to see one of the dolls when a curator at the Children’s Museum of Indianapolis happily agreed to unpack the stored “Miss Shimane,” and set her up according to the original instructions, still in the box.

The Museum is one of the few children’s museums that collect artifacts. The doll had not been displayed for 10 years. As Lowe explains, when she asked about the doll, the concierge said, ‘Hang on a minute,’ and came back with curator who took her to a lower level of the museum and showed her the doll with gloved hands.

“It was so cool,” Lowe said. “Oh my goodness I wrote about that.”

Lowe explains the lesson from the story:  “The father’s sacrifice his job for his daughter to help her acclimate to America. She’s been adopted from Japan. The story shows the importance of his ability to take risks for family.”

She admits that while writing the story, she thought of the father as the antagonist, but when she heard her mother explain the story to her grandpa, she realized a second meaning. She said, “That’s really cool, because Mom found a different meaning.”

Lowe attributes much of her success as a writer to Strebel, whom she says prioritizes creative writing time for her students and encourages them along the way. When reflecting on her writing experiences, Lowe offers the following advice: become an avid reader, follow your interests, find your passion, practice patience and persistence, and be spontaneous and open-minded.

Lowe hopes to become a teacher one day, or perhaps something that incorporates her love of history. She also loves math. She describes herself as a systematic person, and says “math is systematic.” She thinks she’ll keep creative writing a hobby because she doesn’t want her creativity to be fettered by deadlines. She plays volleyball, basketball, and the trumpet.

“Miss Kagawa’s Gift” is scheduled to be published in the January issue of “Stone Soup.”

— Eighth-grader story to be published in ‘Stone Soup’ —