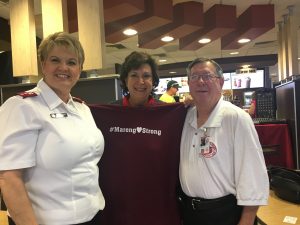 Salvation Army Captain Carol J. Lewis jolted wide-awake from her bed in Crystal Lake when she heard the explosion.

“My house shook,” she said. “I knew it was an explosion because of the large whoosh, sound.” Little did she know that a home was completely demolished and 51 homes damaged in Marengo around 5 a.m. Neighbors quickly rallied around the displaced families with water and supplies, as news of the tragedy spread.

Singleton Management Company, a family owned company who owns and operates the Marengo McDonald’s, and seven others in McHenry, Kane, and DeKalb counties decided to host one of their McCare 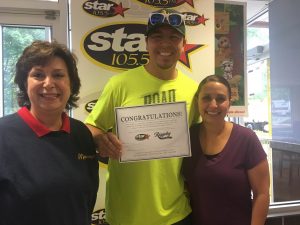 “I can’t remember anything this big happening in McHenry County,” said Lewis.

Joseph Logan from Salvation Army, director of the local Salvation Army for 32 year said, “Captain Lewis and God asked him to come and help.”

All money collected in the Red Kettle during McCare 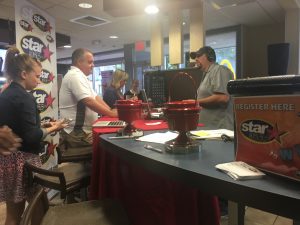 Day, June 16 goes to the families that experienced loss due to the explosion.

“We are offering a way to help the people of Marengo rebuild and come back strong,” said Lewis, “Their needs will change and grow day by day.”

Singleton said that “as soon as the explosion happened, people started thinking about how they could help. The next logical step is to regroup and provide what people need. Partnership with Star, seemed natural.”

McDonald’s McCare Days cover a variety of local needs in communities around the country.

John Koziol, Marengo’s mayor was amazed at the outpouring of assistance the community is offering.

“I’ve been in law enforcement for 26 years,” he said. “This is the most amazing thing I’ve every seen. It makes me very emotional.”

Koziol was quick to point out that these kinds of tragedies can be fertile soil for con artists.

Koziol warned “Make sure everyone who offers repair work has permit.” He went on to say, “The City is not issuing any permits to go door-to-door, in an effort to curtail scam artists.”

“When you think of Marengo, you think small town,” said Cicero co-host of Star 105.5 Morning Show. “But you really are Marengo Strong,” he said, referencing the maroon and white T-shirts people purchased at the McCare event..

Katie and Tony Koch from Horizon Electric found out about the explosion on FaceBook. Their business has been based in Harvard for 14 years.

“We donated $750 for each displaced family and total of $5,000 to help all of the families rebuild. Contractors from the county are challenging each other to donate services and and collect funds to help address the needs of the community.

Anyone interested in donating can do so through the Salvation Army website, SalArmyCL.org. “Marengo Strong” T-shirts are available for $12 at Hyperstitch in downtown Marengo, or order on-line at http://www.hyperstitch.com. All proceeds go to help the families affected by the explosion.