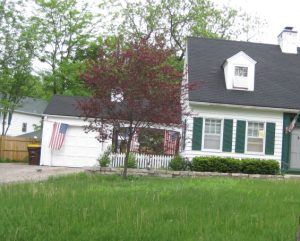 The house at 94 S. Dole Avenue, as it appeared in April when authorities alleged that 5-year-old AJ Freund Jr was killed, has been demolished. (Photo courtesy of the Crystal Lake Police Department)

The Freund family house, located at 94 S. Dole Avenue in Crystal Lake, was demolished March 4 through a contract with a Chicago-based contractor, and hazardous materials removed, to remediate the land on the 20,000-square foot lot ahead of a potential tax sale.

The home, which had been boarded up and vacant for nearly one year was the site where 5-year-old AJ Freund was brutally beaten by his parents, Andrew Freund and JoAnne Cunningham. The two-story cottage-style house Crystal Lake’s city council unanimously approved the demolition, at its Jan. 7 meeting, after a complicated set of judicial decisions on foreclosure and title reversion back to Freund and Cunningham.

The titleholder is real estate investor, William Progar, who regained possession through foreclosure and litigation, then basically “walked away,” from the property.

“The property has reverted back to the owners (Freund and Cunningham), after Mr. Progar walked away,” said Michelle Renzsch, the city’s Community Development Manager. “The process would involve a tax sale in moving forward. We have received a fair amount of phone calls at the city hall, from people inquiring about the property, and its availability. At this stage, people are thinking about the property and building on it. This is a beautiful neighborhood, and a lovely lot.”

The city council’s vote to raze the house resulted from more than $100,000 in code violations, as set forth in a civil lawsuit against Freund and Cunningham. The city’s claim and potential tax sale is predicated on the inability of the couple to pay for its obligations, due to the municipality.

Records show that Chicago-based Green Demolition Contractors, Inc. was awarded the contract to tear down the house, remove the materials, and landscape the grounds. It had offered to perform the work as a free donated service, although the city council entered into a nominal $10 contract. Renzsch said the company had preferred to stay anonymous, “as they were doing a good thing.”

Hazardous materials were removed, prior to the demolition, by Markham, Illinois-based Environmental Cleansing Corp., which was engaged through a $5,500 contract to haul away asbestos materials found in the basement and a bathroom.

The site became the focus of a missing child search April 18, when Freund and Cunningham reported AJ Freund Jr. to be missing. The subsequent investigation included a K-9 unit that raised the possibility that the child had not left the site “on foot.” The child was found six days later, wrapped with plastic in a shallow grave, near a Commonwealth Edison service road in rural Woodstock.

Authorities were led there to the farm field, following a confession by Andrew Freund, and a search warrant affidavit. The document related that the child was made to stand in a cold shower for a “period of time” because he soiled his pants. He was repeatedly beaten, and put to bed naked, wet, and with no blankets.

The couple was charged with first-degree murder, and Freund was additionally charged with concealment, and remanded to the McHenry county Jail in Woodstock. The bond amount for the couple was set at $5 million each. Cunningham later pleaded guilty to the single felony charge of first-degree murder and is awaiting sentencing, which could extend to 60 years of incarceration. Freund made a late February court appearance and asked for a bench trial.

Regarding the intended use of the parcel, Renzsch had said the city was being receptive to the neighbors who preferred another home and family. “Everyone just simply wants to move on.”