The Chicago White Sox visited the county, and played the McHenry White Sox in a 1914 game, which attracted more than 10,000 spectators. (Photo courtesy of the McHenry County Historical Society)

You’d be hard-pressed not to see someone playing catch in an open field, in parks, back yards, or pick-up teams having fun with the national pastime. It was the same theme in the 1860s, although the more recreational aspects coincided with entertainment and local rivalries.

The McHenry County Independents are representative 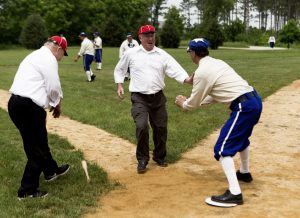 OLDBASE – Independants(cq) Roger Naylor is out at home by Waukesha Diamonds Paul Brady during an 1870’s style baseball game between the Waukesha Diamonds and McHenry County, Illinois, Independants(cq) at Old World Wisconsin in Eagle, Wisconsin on Saturday, June 4, 2016. Both teams wore historically accurate baseball outfits from the year 1874. Baseball was typically played by younger, single men from the area looking to impress the ladies. CALVIN MATTHEIS/calvin.mattheis@jrn.com

of that decade, when it was “Base Ball.” They are based out of Union’s McHenry County Historical Society, and play an intermittent schedule against other vintage squads. The games are convened in a field, ringed by spectators, for a lazy afternoon of sport. Players are from the Marengo-Union area, the county proper, or “conscripted.”

“It started about four years ago, with a colleague that played with the Lake County Athletics,” said Kurt Begalka, the historical society’s director. “I got to play in a game, and it was fun. We did research through newspaper articles and found there was a local county team called the ‘Independents.’ Whether it was a typo, or not, we kept the name.

“We started playing at the Prairie Grove Village Hall Park, about three years ago, and there’s a real throwback look there … there were hay bales in center field,” he said. “There were a lot of local teams. My grandfather actually played for the Bartlett Canaries. The Oliver Typewriter Company in Woodstock fielded two teams, one for me, and one for women.”

This brand of the game is vintage and a time capsule, with differences and similarities to the modern-era version. The official label was “club,” not “team.” Like any club, members paid dues or fees. Depending upon the amounts raised, the club could buy uniforms, bats, and balls. No fielding gloves were used, and the balls were spherical-shaped with twine innards encased in a brown hide that often lost shape, after a few innings.

Home clubs furnished the ball, which carried an approximate $1.50 cost, still a large sum in the 1850s. The winning club would get the ball, inscribe the date and final score with the signatures of club members affixed, and ending with a coat of varnish. The ball became a trophy and was never used again. The calligraphy on the ball also reflected the aesthetic of the period.

By the 1870s, the loose affiliations of local and factory town teams had organized into professional leagues, and the contracted term, “baseball.”  However, the vintage period was highlighted by the players’ demeanor, bound by a code of fair play and gentlemanly aspects, that was the game’s intent. The pitcher had no mound to throw from, instead tossing the ball underhand from a square box area.

“Other differences can be highlighted by a hypothetical batting sequence,” said Ryan Schwartz, manager for the Wisconsin-based Eagle Diamonds. “When the striker (batter) is on the line, he can tell the pitcher where he would like the ball. Not wants, ‘would like.’ The striker can choose his pitch, and strikes are called only if the umpire feels he is abusing the privilege of selecting his attempt, or misses, of course,”

“Likewise, the umpire only begins to call balls, if he feels the pitcher is not acquiescing to the striker’s location of choice,” he said. “When there’s a third strike, if the catcher misses the ball or doesn’t catch it on the first bounce, the striker is still running for first base. The idea is to give the striker every opportunity to enjoy the sport. Other than the extremely courteous approach, the ‘dropped’ third strike is still in effect today.” 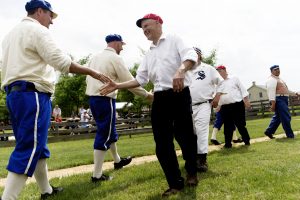 At the match’s end, the clubs line up and the umpire will declare the match winner. He’ll give the ball to the winning captain, and he gives it to the other. Both teams applaud as a gesture of respect, and each captain gets to speak and thank the umpire, scorekeeper, the squads, and the crowd for attending.

“The winning club gives three ‘huzzahs’ for the other team … competition is there, although not the main purpose. It is enjoyment,” said Schwartz. Other vintage ball clubs compete in associations with strict rules adhering to a given decade, although the simple pageantry and proprieties remain in place.

Coral Township Supervisor, and Independent club member, Roger Naylor, noted, “Now, how else can you spend a nice afternoon, other than playing this game and having fun?”

The McHenry County Independents are slated to play Aug. 27, at 4 p.m., at Grayslake’s 4th Annual Color Aloft Balloon Festival in Central Park, located at 250 Library Lane. During last year’s contest at the festival, with the Lake County Athletics, the playing field was near the hot-air ships, bringing some good-natured and improvised discussions on the rules.

“There was rain, and the original playing field was like a quagmire, so they moved it,” said Begalka. “We wanted to know, if the ball hit one of the balloons, was it a ground-rule double?”

— McHenry club recalls when the game was known as base ball —