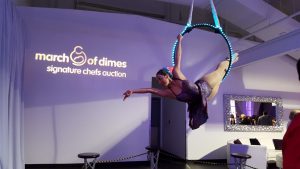 Dressed in a patriotic costume resembling a cross between the girl-next-door and Wonder Woman, Leela Miller has an act that mixes hula hoops, contortion and gymnastics.

Miller, whose performance name is Leela Mae, most recently performed in the Elgin Fourth of July Parade.

“The hoopla hoops are my favorites,” Miller said, without hesitation.

A confessed overachiever in high school, Miller always liked performance arts. Besides being an honor student she became involved in the theater, dance, radio club, and gymnastics. As a sophomore, she was homecoming queen. In high school, she set her sights on Hollywood. 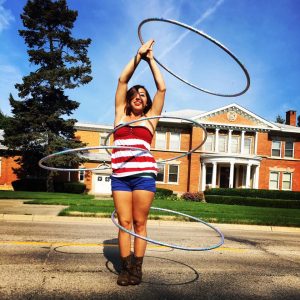 Then she discovered a hula hoop video on YouTube. She loved the way she could combine her skills of contortion and gymnastics in a beautifully fluid and acrobatic performance. From there out she was hooked.

Miller graduated from Huntley High School in January 2014 and headed straight to MCC so she could get a job that she likes, pays well, and allows her to pursue her passion. Before long, she graduated from the Culinary School. She has high praise for the program, and much of the business acumen she gained can be used in building her performance brand. Still, she cautions new graduates.

“If you plan to pursue something artsy and don’t know what it is yet, start with the general education classes, while you figure it out.”

Although she began as a self-taught hula-hoop artist, she realized that she needed coaching to master some of the more difficult tricks. She trained at the New England School of Circus Arts (NESCA) which is the oldest school of its kind in the nation.

“I learned way more than I expected in the intensive two-month training session,” she said.

“They cut the ribbon, kicked the doors open and all the performers were spinning in the air,” she said.

Miller was suspended on a lyra, a giant metal hoop.

“I like the lyra and trapeze because the performances combine muscular poses and dynamic acrobatics.”

Being on the road can be tiring, so when the Vagabonds took a hiatus, Miller looked for a place to train. That’s when she found Cal Elite Kids in Crystal Lake. Not only did she get a place to practice, they asked her to coach. She teaches the 6-12-year-olds, as well as an adult class that includes her mother. The programs at Cal Elite Kids are performance based, not competitive. Miller will be part of the “big show” or recital to conclude the year.

Miller hopes to do an intensive nine-month program at NESCA, focusing on combining the three types of performance she loves: gymnastics, contortion, and hoops. In the near-term, she does corporate events and parties. One day she hopes to land a contract as a performer in Canada, USA, or perhaps a cruise line.

Her parting words of advice, “Don’t be afraid to take a leap of fate. You have to put money into your dream before you get anything out,” she said. To find out more about Miller, visit her website, www.leelamaecircus.com, or to book a performance go to www.gigsalad.com.

–Hooping it up: Huntley graduate expresses herself through performance–