An artist rendering of the library exterior showing the design and entrance area, when completed. (Photo courtesy of the Huntley Area Public Library)

The Huntley Area Public Library is expecting to move forward and start the bidding process around Thanksgiving 2019 that will eventually lead to an overall upgrade for the facility including a 17,000-square-foot addition and nearly double its size.

The construction job order is tentatively to be awarded in January, and actual construction taking place in March, coinciding with the removal of three trailers currently in use for programs and attached to the building.

During the November 2018 general election, district voters approved a $12.9 million building bond referendum with a 20-year term for the life of the bond. It is expected that a median value residence of $231,100 would see an increase of $57.32 to its annual property tax bill. Although the area has experienced a tremendous growth in residential homes through new subdivisions in the last two decades, the district held off approaching voters.

“The original building opened in 1999, prior to a lot of residential construction that took place in the intervening time, and we were unable to grow with community,” said Leigh Ann Porsch, the library district’s head of marketing and public relations. “This was timed to serve our population better. Currently, we don’t have the space to do what we would like to. For example, our program room seats 35 people, and when you have a population of approximately 39,000, it is inadequate.

“The other point is we presently have three trailers attached to the building. Our program room, and children’s area needs to accommodate more people, and according to the local fire code ordinances, the maximum capacity is 12, in relation to the room size.”

One reason the district did not pursue a building bond issue sooner was not to overburden area taxpayers. Ongoing work at the three campuses of the Huntley School District 158, from 1996-2007, necessitated an $80 million bond referendum for construction, which voters approved. The effort brought back a state of Illinois matching grant of $39 million in funds. The school board decided to place part of the referendum money toward debt service and refinancing. 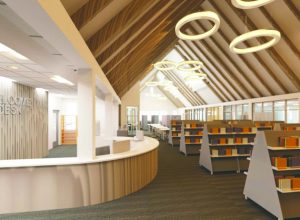 An interior look at the desk and community hub near the library entrance. (Photo courtesy of the Huntley Area Public Library)

“The square footage of the library, as it stands, is 15,000 … the referendum is funding a new addition for the library, as well as renovating the current building,” said Porsch. “When it’s all done, the entire structure will have an estimated 34,000 square feet.

“Once the addition is completed, all the resources, and staff, will be moved into that area, while the standing portion undergoes renovation. When that is finished, everything will be spread out and arranged to a permanent place, and the ergonomic aspects will provide more comfort while assisting with better room management. The district is looking toward a tentative grand opening in the spring of 2021. We’re really excited about all this activity taking place, and a better environment for our patrons.”

The building resembles a large barn with a cupola, in keeping with the rural atmosphere of the surroundings. The district, which straddles McHenry and Kane counties, along with parts of Algonquin, Hampshire, Huntley, Lake In The Hills, and Union has seen a tremendous growth in residential subdivisions over the last two decades.

“The population exploded in early 2000, and this is the area we serve,” said Porsch. “We’re thrilled, and so great grateful to the community for their support. This is the right time.”