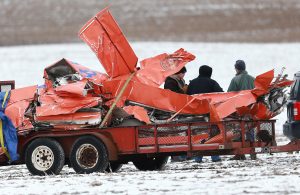 Wreckage of the Zenair plane, flown by Rob Sherman, was removed from the scene by the National Safety Transportation Board. (Photo courtesy of newlocker.com)

The McHenry County Coroner’s Office identified the remains of a plane crash victim in a rural Marengo farm field, as those of noted atheist Rob Sherman.

A Dec. 12 press release was issued confirming the individual’s name, following an autopsy performed that afternoon. Information on the incident, which occurred two nights earlier, was not immediately forthcoming pending the availability of personal medical records and notification to the next of kin.

The release, signed by county coroner Anne Majewski stated, “Identification of the victim in the Marengo plane crash was made this afternoon after a forensic dental examination. The victim is identified to be Robert I. Sherman, 63, of Poplar Grove. Autopsy performed today showed he died from multiple crush injuries due to the plane crash.”

The crash is still under investigation by her office, the Federal Aviation Authority, and the National Transportation Safety Board, as to causality for the downed aircraft. A Dec. 10 release, from her office, had indicated that the lone victim, the pilot, was pronounced dead at the scene at 7:53 a.m., approximately 25 minutes after the Marengo dispatch had been alerted to the wreckage.

“Dispatch notified us at 7:28 a.m., that a passerby had called 911, after seeing plane wreckage in a farm field, located at Meyer and Pleasant Grove roads,” said Marengo Police Chief Rich Solarz. “The Marengo Fire and Rescue Department also arrived there, and found no signs of life. The area was cordoned off, in advance of other agencies arriving, specifically the county coroner’s office, as protocol.

“The NTSB moved the plane to a nearby facility for easier access, and because of the expected weather. The crash occurred either late Friday night, or early Saturday morning,” he said. “There was no other information released at the time.”

Sherman had moved from Buffalo Grove, to Poplar Grove in recent months, and the Boone County site was equipped with an airplane runway. Sherman had been involved with “building your own airplane” kits from the Missouri-based Zenith Plane Aircraft Company, and offering a site to construct the product. The plane involved in the crash was a Zenair CH601.

Sherman is best known for being party to a lawsuit filed against the city of Zion, and the village of Wauconda, for having crosses atop municipally- owned structures at Christmas, in violation of the separation between church and state. He also ran as a Green Party candidate for the 5th Congressional District in the Nov. 8 General Election, and was defeated in an attempt to unseat incumbent Mike Quigley.

Sherman was also a radio show host, for a period of time, and recognized as an atheist through his activities and activism on personal rights issues.

— Investigation underway into cause of plane crash that killed Sherman  —