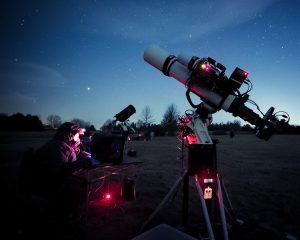 The Northwest Suburban Astronomers is a group of about 150 individuals and families from all walks of life and all age groups who share an interest in amateur astronomy. More about NSA Club can be found at http://www.NSAClub.org.

“It actually felt like I was in outer space,” exclaimed 6-year-old Lucas Riniker at Cary Public Library’s Astronomy Night, Oct. 19.

The NSA Club brought its high-tech telescopes so attendees could view Saturn, Neptune and Uranus, as well as numerous deep-sky objects such as the Andromeda Galaxy, the Pleiades, and the globular cluster M15. Telescopes were set up behind the library. According to their website, “the moon was just short of first quarter, and at its best for dramatic views of lunar mountain ranges, maria, and craters.”

In spite of a clear warm night, the turnout was a little sparser.

Cary Library offers a wide range of services that go beyond checking out books and movies for home enjoyment. Programs like robotics, healthy living, arts and crafts, and genealogy include just a few of the topics offered to children, adults, seniors, and the homebound. To find out more about what the library offers, visit http://www.caryarealibrary.org.

“This year we’re competing with the Cubs,” said Reopelle. “These guys [NSA Club] teach a lot as they talk to the people.”

“She’s the one who got me interested,” Heath said. “She’s learning a lot about space in school.” A fifth-grade student, Hadley said, “I like Neptune the best because of its bluish color and its windy atmosphere.” 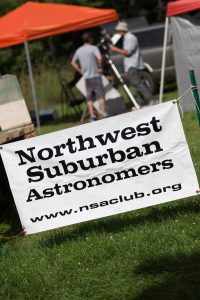 This evening she stood in a long line to get a peek at Saturn.

Heath hopes to take the family on a summer vacation to the Kennedy Center so they all can learn more about astronomy.

John Schwartz, one of NSA Club vice presidents patiently readjusted his telescope as the earth turned, so everyone could get a look at Saturn. He explained how to look into the eyepiece.

Asked why she came, Jessica Becirovic said, “I was just curious. I never looked in telescope before.”

She brought her fifth-grader, Eva.

“I didn’t think I’d be able to see [Saturn] that well, Eva exclaimed. “I can really see the rings.”

She went on to repeat Schwatz’s instructions to “Look with one eye and close the other.”

David Riniker brought his two sons, Lucas, 6, and Henry, 4, and mother-in-law, Esther, who is visiting from Germany.

“Lucas had such an interest, looking at the stars, reading books about the solar system, we started going to events,” McFaul said.

They attended an event about the solar eclipse earlier this summer.

The Northwest Suburban Astronomers is a group of about 150 individuals and families from all walks of life and all age groups who share an interest in amateur astronomy. They meet the Friday closest to full Moon. Recent programs have included presentations on deep-sky observing and imaging, NASA missions, and theoretical astronomy.

The club also partners with The Space Place to help spread the excitement of space and Earth science, as well as the technology that advances the science. More about NSA Club can be found at http://www.NSAClub.org.

–Library’s Astronomy Night simply out of this world–