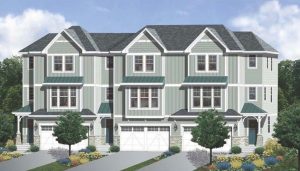 Conceptual drawing of the proposed condominiums. (Village of Cary website

Over two years of debate about the fate of the Maplewood Elementary School seem to be ending.

This summer Patrick Taylor submitted his vision for the property, which he named Maplewood Station development.

On Oct. 3, Taylor showed he listened to his new neighbors’ concerns.

He presented his conceptual plan at the Committee of the Whole, where residents expressed more concern about the construction process, traffic, and drainage than resistance to the development.

Maplewood Elementary School at 422 Krenz Ave., Cary closed in 2010, as a cost-cutting measure. As the property and building continued to fall into disrepair and dilapidation, neighbors rallied to prevent multi-story, mixed-use apartment buildings and integration with the downtown area and Metra station.

Taylor listened to the community and adjusted his plans in order to overcome the resistance.

Conceptual drawing of the proposed apartments. (Village of Cary website)

Objections included a misunderstanding that the development included affordable housing. As with other Illinois communities, Cary committed to 10 percent affordable housing as part of their Comprehensive Plan. Some of that requirement is met with the Cary Senior Living Facility located on Three Oaks Road, near the U.S. Post office and Jewel-Osco.

The village’s Comprehensive Plan provide sensitive guidance regarding the Maplewood Property and the potential redevelopment of the 15-acre site. The Plan allows for high-density housing and mixed-use building on the property.

The Village Board held a Special Village Board Meeting Aug. 22 to meet with Taylor and provide preliminary feedback on re-development of the site prior to production of plans.

In response to comments, Taylor dropped the density by about 150 units. The buildings will be made of “hardy, maintenance-free materials.” Trustee Ellen McAlpine, who rides the train, hoped the aesthetics would be more pleasing, “possibly with brick façade,” she said.

The four-story apartment buildings with 600-1200 square foot units, will be near the railroad tracks, away from the current residential area on Krenz Avenue.

Taylor’s preliminary plans include parking on the first floor. Closer to the residential area, he plans to have luxury townhouses and for-sale condos.

Conceptual drawing of the proposed townhomes. (Village of Cary website)

“The traffic study will determine how to extend a road to Cary-Algonquin Road,” according to Taylor. This assuaged much of the concern regarding traffic. However, some citizens expressed concern about traffic during construction.

Another major concern is drainage. An existing retention pond will be altered during construction. Taylor assured residents that drainage will be addressed in the engineering plan. He failed to address the concern about flooding during the construction process. The area has been fraught with rain-water flood issues on a regular basis.

Other residents brought up the possibilities of asbestos contamination and disposal of the underground tanks still buried on the property. Taylor promised to address these concerns.

Taylor’s plan is designed to attract different demographics. Some apartments have near-grade entries to accommodate the older demographics. “When you’re my age, you think about things like stairs,” he said. 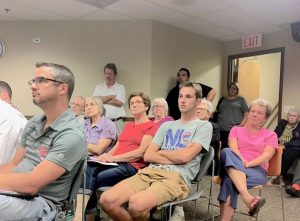 The three-bedroom townhouses are “designed for millennials.”

Taylor’s plan includes 250 apartment rental units and 78 townhouses or condominiums. In response to one alderman’s question, Taylor is open to what she called, “zero-lot-line condominiums,” in other words, free-standing, rather than attached units.

Contrary to previous meetings, Taylor’s desire to listen and respond to community concerns helped to smooth the emotions. As McAlpine expressed, the changes are “a hard pill to swallow.” Keeping “Maplewood” in the name of the development goes a long way to holding on to the memories of people in the neighborhood.

“This will probably be my last development,” said Taylor. “I want to do it right.”