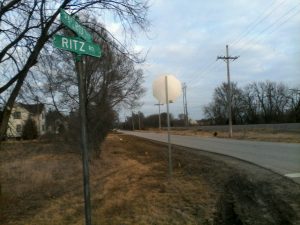 The intersection at Railroad Street and Ritz Avenue, where the contamination has extended. The Arnold-300 West site is in the background. (Photo by Gregory Harutunian/for Chronicle Media)

Attorneys for Arnold Magnetic Engineering, Inc., and its parent property owner, 300 West LLC, will meet Oct.10 before 22nd Judicial Court Judge Michael Chmiel for a status hearing revolving around a deadline extension agreement on hook-ups to the new water main on Railroad Street for residential and commercial properties impacted by the company’s byproduct contamination. The Aug. 15 motion was approved Sept. 7 in citing ongoing negotiations with third-party entities and easement access grants.

The filing responded to a June 27 Chancery Division court order identifying an Aug. 14 date for hook-up completion between impacted residents and the city of Marengo water main. The companies have stated “all easement plats/subordination agreements have been forwarded to the applicable property owners.”

“The motion to extend deadlines, that was submitted by the defense … explains the outstanding issues and third parties involved,” said Annie Thompson, press secretary of the Illinois Attorney General’s Office. “We are trying to work with the third parties involved to reach a resolution that will enable the remainder of the hook-up project to move forward.”

A Feb. 23, 2016 accord with the city of Marengo stated the defendants would pay for a water main connecting the municipal water system with the plant site, Railroad Street and Ritz Road. Marengo forwarded its version of an August 2018 amendment, but it “still needed additional information and language added or confirmed either by the parties or the city engineer (HR Green) … All parties have been working to reach a final agreement on the accord.” 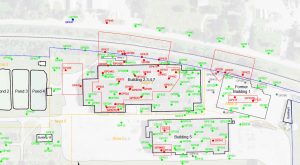 City Manager Josh Blakemore said, “Basically, it’s now down to easement access for the property owners, and negotiating for the hook-ups with them. The water main connects to the city works for the water supply. The property owners that do connect, it still goes that they will be charged the ‘in-town’ rate, and will not be required to annex into the municipal boundaries.”

The issue surfaced when Marengo crews attempted to install a well on Ritz Road, and discovered the condition. In May 2010, Arnold retained a consultant group with monitoring wells to produce on-site samples, and the findings confirmed the presence of toxic chemicals. The study revealed carcinogenic agents and composition elements that included Vinyl Chloride, Xylenes, and Trichlorofluoromethane, among others.

The contamination plume was determined to be migrating toward residences and businesses along Railroad Street, and potentially reaching the Kishwaukee River basin. The chemicals were used on-site in the production of magnets.

A subsequent 2013 civil lawsuit was filed under by the state attorney general’s office against Arnold and 300 West LLC, on behalf of the Illinois Environmental Protection Agency, seeking to enforce testing regimens, initiate remedial action, and set punitive damages. An estimated 17 private wells within a one-mile proximity of the plant site were claimed to be impacted by the contaminants.

Adding further weight was testing data completed in early 2017, compiled by Geneva-based Suburban Laboratories, Inc. on groundwater samples. The integrity of the samples followed quality control conditions and chain of custody guidelines, as stipulated by the IEPA.

“The (flow) models showed significant change in head basin and capture zones for the flow and movement within the supply aquifer occurred only when recharge dropped 30 percent and pumping increased 30 percent within the aquifer supplying McHenry County wells,” per the report, regarding the contaminant plume’s movement in the groundwater. The Kishwaukee River Valley was highlighted as the major water supply source for the area.

A “Summary and Results Discussion” section, noted the groundwater flow model “can be an appropriate tool in assessing the impacts of high-capacity irrigation wells in local unconfined aquifers of McHenry County … However, the simulations are not a perfect representation of actual conditions, specifically in regards to those simulating drought and increased pumping.

“Typically, drought conditions show a decrease in precipitation, which in turn is assumed to lead to an increase in pumping. This simulation provides results for steady-state conditions. It is difficult to determine then what the effects of extended drought and increased pumping over longer time-steps will have on the shallow aquifer system.”

Monitoring will continue, although several contingency mitigation scenarios have not been effectuated. The report also supplies plats and exhibits in meeting IEPA compliance measures from 2015-17, attached to wells, testing regimens, along with groundwater and soil samples analysis.

The Oct. 10 status hearing will focus on the easement agreements with the remaining property owners. “As such, the timing, logistics, and details of the construction cannot be finalized so as to provide applicable notices and conduct meetings prior to construction,” according to the motion. “Moreover, given the lack of signed easement agreements it is unclear at this time which properties will actually be hooked-up …”

Check us out on LinkedIN