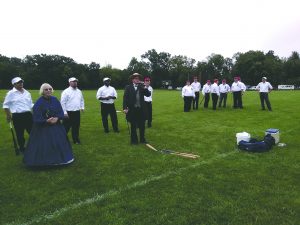 The McHenry County Independants take the field, as the barrister makes the rules known to spectators. (Photo by Gregory Harutunian/for Chronicle Media)

For many summers now, the McHenry County Independants, spelled with an “a,” have taken to the field of play in the style of an 1860s sport known as “base ball.” Based out of Union’s McHenry County Historical Society, this brand of the game is vintage and a time capsule, with many differences to the modern-era version, along with familiar rules. It’s spelled “base ball,” as two words. One similarity, before domed stadiums came along, is that games are subject to the weather.

“The last weekend of June, we were supposed to play the Chicago Salmon in Fox River Grove on a great throwback field … all lined-out,” said Kurt Begalka, administrator for the historical society. “We hoofed it out there, only to get torrential downpours. But the club members that went out there do appreciate the game. Over the years, a core group of people has built up that know each other, and that’s what makes it all special.

“Selfishly, a lot of us on the club are north of 40 years old, and it’s fun to be able to play ball. We played as kids, church leagues … it’s a chance to do something not super competitive, where you cut out hearts, it’s an aspect when the game was very much in its heyday,” he said

The official label was “club,” not “team.”

Like any club, members paid dues or fees. Depending upon the amounts raised, the club could buy uniforms, bats, and balls. Fielding gloves were not used, and the balls had twine innards, encased in a brown hide, that often lost shape after a few innings. The games were played on an open field, ringed by spectators.

“Folks think the game started with the way it is now, when actually, it was a progression,” said Begalka. “It’s a real eye-opener … partly ‘Field of Dreams’ and just the purity of it all. This is before big money, and it didn’t cost a family $150 to attend a ballgame.”

By the 1870s, the loose affiliations of local and factory town teams had organized into professional leagues. The vintage period was highlighted by the players’ demeanor, bound by a code of fair play and gentlemanly aspects of competition, the game’s intent. Pitchers had no mound to throw from, instead tossing the ball underhand from a square box area.

The striker (batter) can tell the pitcher where he would like the ball tossed. Foul balls did not count as strikes, which are called only if the barrister (umpire) feels the privilege of selecting a pitch is being abused, or swings and misses. Other wrinkles include catching a fly ball on one hop for an out, called “hands,” defined by the era’s rules. The notion was to give the striker a fair opportunity to enjoy their chance. 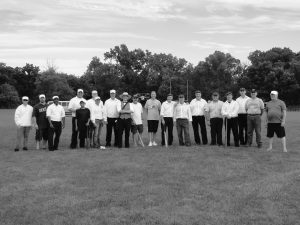 The McHenry Independants posed for a club photo, following the final game in 2018. (Photo courtesy of Sue Sobrowski)

Begalka found there were many such teams. In 1914, the Chicago White Sox came to the county and played the McHenry White Sox. The Chicago club made several annual trips to the area, along with “barnstorming” clubs of major leaguers that played against local factory clubs. Begalka’s grandfather played for the Bartlett Canaries. The Oliver Typewriter Company in Woodstock fielded two teams: one for men, and one for women.

“It’s an interesting thing, there are lots of groups and clubs currently that play this style,” he said. “Taking it on the road to other venues helps spread the appeal. We also might pull kids out of the crowd to run for players, and it gets everyone involved. It’s just fun for us, and for everyone to be able to share an afternoon.”

As for the club’s name, Begalka added, “We did research through newspaper articles and found there was a local county team called the Independants. Whether it was a typo, or not, we kept the name.”